Versace and Fendi Collaborate On World-First Show and Collection

At a time when we’re valuing togetherness over dissonance, and support over anything more self-serving, two heritage Italian brands came together in one history-making catwalk event, as Fendi and Versace closed out Milan Fashion Week in exceptional style. The two storied fashion houses collaborated on a show – named ‘Fendace’–which saw Donatella Versace switch places with Fendi’s creative leads, Kim Jones and Silvia Venturini-Fendi, so that each was able to design and innovate on behalf of the others’ brand. The result was a glorious celebration of fashion and the power of collaboration, which saw both Fendi and Versace signatures blended together.

“It’s a first in the history of fashion: two designers having a true creative dialogue that stems from respect and friendship,” said Donatella Versace. “It led to us swapping roles to create these two collections.”

The show notes on behalf of the two brands explained: “With the archives fully opened to both, a unique cross-fertilisation occurs, with elements transposed from each house; at heart remains a deep admiration for the codes and cultures of both, together with a mutual encouragement for the designers to be themselves. Needless to say, the results could only be achieved with fundamental respect and reciprocal trust. Ultimately, Fendace is about the need for sincerity in fashion today rather than strategy.”

The Versace by Fendi collection explored the idea of duality – most pointedly seen in the fusing of the iconic Fendi monogram with Versace’s signature Greek Key motif. The looks were designed to morph and change, with many pieces reversible or concealing hidden codes, and had an emphasis on multigenerational design.

The Fendi by Versace collection took on a punk-rock aesthetic, with Donatella focusing on “contamination and disruption”. Versace safety pins embellished Fendi classics in a series that was designed to feel youthfully rebellious.

Naturally such a momentous occasion called for a starry roster of catwalk models of both previous and current generations, with an emphasis on ’90s supermodels – which, coincidentally, was the time period that influenced both collections. Kristen McMenamy opened the show, while Naomi Campbell closed it; Kate Moss and Amber Valletta made a striking appearance as a pair midway through; while Karen Elson, Mariacarla Boscono and Shalom Harlow also featured.

Naturally some of the industry’s current biggest names and up-and-coming faces were also present, including Gigi Hadid, Emily Ratjkowski and Adut Akech, alongside Paloma Elsesser, Precious Lee and Mona Tougaard. It also marked the first time that Kate Moss and her daughter, Lila Grace Moss, appeared on the same catwalk together. 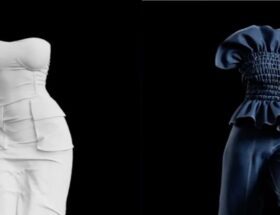