The supermodel sisters posed with Donatella Versace herself.

Versace’s latest campaign is all about family, and Gigi and Bella Hadid are the stars.

Both of the sisters have been regulars at Versace shows over the years. Gigi shared some of the images from the on her Instagram, along with a sweet post about working with the brand and Donatella Versace over the years.

“Family💘 Being a Versace girl has been one of my greatest honors over the years; but the most valued moments are the ones with you @donatella_versace. If you get to know your heroes, and they’re better than you could have dreamed, remind them! I love you DV, and appreciate you so much,” Gigi captioned her post.

Per the brand’s Instagram, the new campaign is “an exploration of family and belonging in its different forms; sisterhood, community, and an embrace into @donatella_versace’s global Versace family.”

“Family is always at the heart of everything I do, which is why I love Bella and Gigi so much. They perfectly exemplify the strength between sisters, and they share that message to our Versace sisterhood worldwide,” Donatella said in a statement.

The younger Hadid also shared the images, with a sweet caption thanking the house’s creative crew.

“VERSACE SS22🖤This still makes me get the body chills . I can’t believe I get to work for one of my biggest idols , side by side my big sister. It’s unbelievable To me. Thank you Dona Allegra , Ferdi, M&M , Piergiorgio , Jacob K, Paul , Diane and the entire Versace crew. I F’ing adore You!!!!” Bella wrote.

She also wished a happy birthday to Maluma in one of the pics, which was posted on the singer’s 28th birthday. The “Hawái” singer is the main face of Versace’s latest men’s campaign, along with his dog Buda. 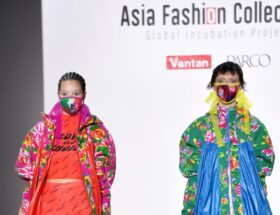