What Is the VMA Tricon Award For?

0
Home NEWS What Is the VMA Tricon Award For?

Lady Gaga was the first-ever recipient of the new honor at the 2020 ceremony.

Lady Gaga was the reigning queen of the 2020 MTV Video Music Awards, taking home an impressive five trophies from Sunday night’s ceremony. One of her many wins was the Tricon Award, a brand-new honor that spotlights an artist who excels in areas beyond music.

“MTV is thrilled to give Lady Gaga the first-ever Tricon Award at this year’s VMAs, which recognizes a highly accomplished artist across three disciplines,” the network tells in a statement. “This inaugural award is in recognition of her talents as a global music superstar, award-winning actor and undisputed fashion icon. MTV looks forward to continuing the legacy of recognizing great performers.”

In the music realm, Gaga has won 11 Grammys and landed five number-one Billboard hits. For her work on-screen, she’s taken home a Golden Globe for her performance in American Horror Story and an Oscar for her original song in A Star Is Born (not to mention, she was nominated for Best Actress for her leading role as Ally). And in fashion, she’s secured the CFDA’s Fashion Icon Award and gone on to co-chair the Met Gala. Plus, anyone who’s watched her at the VMAs throughout the 2010s knows that the recognition of her one-of-a-kind style is well deserved.

The Tricon Award is different from the VMAs’ traditional Video Vanguard Award, which “is officially given in recognition of an [artist’s] overall achievements in music and film, but is sometimes handed out as a lifetime achievement award,” according to MTV. There was no Vanguard Award honoree this year, but past recipients include Missy Elliott, Beyoncé, Britney Spears, Madonna, Michael Jackson, and The Beatles. 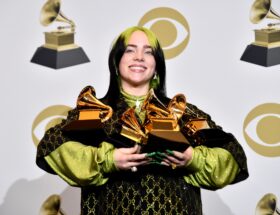 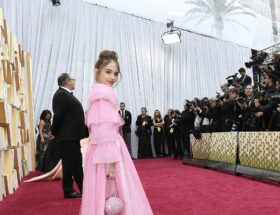