The Fifty Shades of Grey actress is always testing the limits.

Dakota Johnson, please step forward for being the most fashionable celebrity at a Hollywood event.

The Persuasion actress has become famous for taking risks with her red carpet attire, and this one is no exception. Back in March, she stepped out to attend the premiere of her film Cha Cha Real Smooth at the 2022 SXSW Conference and Festival in Austin. Instead of wearing a glam dress like usual, she shocked folks with a bold patterned pantsuit.

The ensemble featured tones of brown and yellow accompanied by a zipper closure. But the part of the outfit that stood out the most was a see-through crystal corset the Fifty Shades of Grey star wore underneath. Featuring a diamond-inspired design, it further accentuated the playfulness of her entire look.

Wanting to keep the focus on the pantsuit and corset, Dakota kept her makeup and accessories minimal. Apart from wearing a simple necklace and earrings for jewelry, the upcoming Madame Web star had her brunette hair styled into a classic ponytail. She pulled the look together with eyeliner, mascara and a brown-toned lip color.

Clearly, Dakota knows what her fans want due to her affinity for making everyone gasp with her daring outfits. What’s more, this isn’t the first time she’s stunned fans with her love of crystals. She’s appeared at Hollywood red carpet events with outfits embellished in crystal before. The actress wore a crystal-spined backless dress to the Tribeca Film Festival in late July. And before that, she wore a crystal see-through gown at the September 2021 premiere of The Lost Daughter at the Venice Film Festival.

So, when can we expect Dakota to wow us with her next breathtaking red carpet look? At the moment, that’s to be determined. But after seeing her in this pantsuit and crystal corset, it may be time for us to change up some staple wardrobe pieces in our own closets.

From: Good Housekeeping US 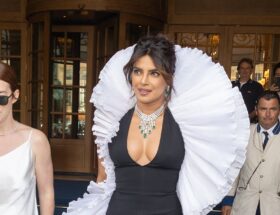 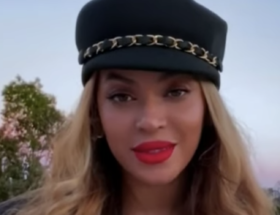