The actresses talk about bringing a whole new level of mean-girl energy to the HBO Max drama.

Savannah Smith and Zión Moreno are redefining what it means to be high school mean girls. The actresses play ever-doting minions Monet de Haan and Luna La to Jordan Alexander’s Julien Calloway in HBO Max’s darker, edgier, and sexier reboot of the beloved teen drama Gossip Girl. But don’t be fooled by the pair’s commitment to their queen bee: Monet and Luna are the true masterminds behind each episode’s glorious mounting drama. Whereas Blair Waldorf’s sidekicks in the original series served as background fodder with the occasional sassy quip, Monet and Luna are catty to the core. For Smith and Moreno, channeling their inner mean girl wasn’t hard—they just took inspiration from the real-life bullies who surrounded them growing up.

“I went to an all-girls private Catholic school in Los Angeles, so you don’t have a shortage of mean girls there,” Smith tells. “I guess it was already kind of inside, but I’m not a mean girl by any means. You just have to imagine someone really different from yourself. But everyone loves to see the mean girl, ’cause they caused the drama and they most often bring the best looks.”

Moreno also took inspiration from her school years when it came to embodying her character, the fashion-obsessed, delightfully snooty Luna. She explains, “Everybody loves the mean girls, and everyone loves to hate them—they’re so fun to play. I actually took inspiration [for Luna] from what my older sister told me to be like towards my bullies when I was younger. I just channeled all that pent-up frustration that I had as a child and came at it in a very fierce and mean way.”

Though Moreno describes the practice as a “little bit” cathartic, most of the time she found the process challenging solely because of the close bond she has with the cast. “I felt really bad [while acting] to be honest with you. It’s hard to be mean to your friends on purpose,” Moreno says. “It’s really weird, ’cause you’re hanging out and laughing, and then as soon as they yell action, you’re a total bitch!”

Bitchiness is at the heart of Gossip Girl, however, and both Smith and Moreno recognized the high expectations that came with landing their coveted roles. Comparisons between their characters and their counterparts from the original series were inevitable.

“Gossip Girl is a legendary show, especially here in New York,” says Smith. “There were all those comments just at the announcement of the show even happening—’It’s never going to be the same’; ‘I’m not watching unless Blair is back!'” She continues, “You just have to kind of ignore that and accept that these are new characters, which I think is the good thing for us. Not everyone at Constance is a Blair or Serena. It’s been fun, but there was a lot of pressure. When the pictures came out at the iconic Met steps? That was really overwhelming. I didn’t think it was gonna have such a buzz around it. And reading the comments and seeing some people were very, very upset [with that first look at the show]—that was a little humbling.”

For Moreno, having the understanding that Luna and Monet were their own individual characters—andpart of an entirely new Gossip Girl generation—eased the anxiety around the public’s opinion of the new set of Constance mean girls.

“I tried to not listen to the noise and just tried develop these characters in a very different way,” Moreno says. “This is a new generation, they are different characters. And as far as the minions go, Luna and Monet are well fleshed-out characters that do not take any—sorry, for lack of a better word—but crap from anybody. Not even Julien. We kind of pull the strings a little bit sometimes, and that’s where the power [dynamics are] different. We’re the ones behind the scenes making all of the drama happen.”

While HBO Max’s reiteration of the series is taking on a number of different approaches to its storylines, drama remains the epicenter of the Gossip Girl universe. That, along with the series’s newly woke-but-still-aloof approach to the lifestyles of the rich and “influential” (to quote Julien herself) is what makes the show a must-watch even 14 years after the original series’s initial premiere.

“Gossip Girl has stood the test of time, because it doesn’t try too hard to be anything that it’s not,” Smith explains. “I remember I saw a meme on Instagram the other day where Serena threw her phone in the trash instead of just hanging up the phone call—that sort of whimsy paired with great writing and great performance? It’s a perfect show. And I do appreciate [the director] Josh [Safran] and his approach to make it more modern and bring it to a new Gen Z audience, because there are kids growing up now who want to see that too.”

Reaching—and impressing—a new Gen Z audience also means recognizing the cultural shortcomings the original series had too, Moreno notes. “The original is such a delicious classic fantasy paired with ridiculous over-the-top drama that really reels people in. Just seeing beautiful people on camera and their beautiful costumes—everybody loves that.”

She adds, “It was really important, though, to create this new world that showcases that white people aren’t the only ones that should constantly be at the center of [such stories] and aren’t the only ones who are successful. I’m really appreciative of the fact that we get to be part of another show that’s added to this new era of diversity and in change that we see in media. It’s really fulfilling. We still have a long way to go though.” 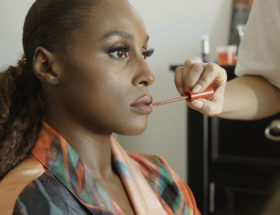 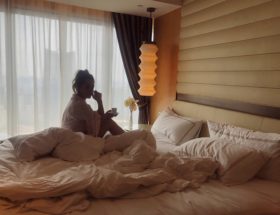 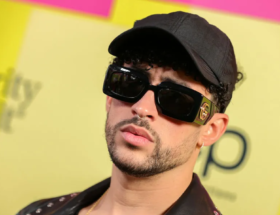