The Fashion in the New ‘Gossip Girl’ Looks Nothing Like the Original. And That’s a Good Thing.

0
Home CINEMA The Fashion in the New ‘Gossip Girl’ Looks Nothing Like the Original. And That’s a Good Thing.

We analyze the style of the original series and the reboot with superfan and Fashionista Editor-in-Chief Tyler McCall.

Like it or not, a new generation of Gossip Girl is coming. And with it, more fashion to inspire. Though this time around, expect less headbands, more knee-high boots with bike shorts.

Though the original series featured an array of top designers—Anna Sui, Marc Jacobs, and Elie Saab are just a few of the designers in constant rotation throughout the show’s six seasons on the air—the forthcoming HBO reboot of the beloved CW teen drama appears to be taking a more authentic and realistic approach to dressing this new generation of teens.

Paparazzi photos, which snapped the cast on the steps of the Met, offer a glimpse into the fashion of the new series, which is expected to air sometime in early 2021. Gone are the crystal-embellished headbands and snug polo shirts. In their place: thigh-high leather boots, bike shorts, and streetwear-inspired hoodies. It’s in keeping with the new approach to the series, which seeks to more accurately reflect the times and the culture with a more inclusive cast and greater queer representation.

Of course, reinventing a “classic” so firmly rooted in the nostalgia of many millennials is bound to ruffle some feathers. Below, we analyze what we’ve seen from the reboot against the original with Fashionista Editor-in-Chief and Gossip Girl superfan Tyler McCall.

The first question is an obvious one: When the set photos began to drop, what was your initial reaction?

So I follow a few behind-the-scenes people on Twitter, and I saw one of the writers tweet out the steps photo with just “SPOTTED,” and it truly was like an endorphin rush. There have been a few pap shots of filming, but seeing them assembled on the iconic steps in school uniforms is a totally different thing!

It was truly a moment!

It’s everything you think of when you think Gossip Girl—so that was the moment I was like, “Okay, I am fully on board.”

There was an instant reaction on social media regarding the cast’s styling. Which I think is a bit unfair to judge, since they’re styled in their uniforms for most of the shots.

I’m really, really into it. From the beginning, the writers and producers have been clear that this is going to be different than the first go-round, both in terms of casting and storylines. I think Eric [Daman, the costume designer] has proved he has a real talent for doing the research, and then putting a ready-for-TV fantasy spin on it. I feel like I already know so much about each of the characters from this one shoot, and they feel real to me! I’m sure fans of the original are going to feel a bit attached to the old aesthetic, but just because I might still want to dress like Blair Waldorf doesn’t mean teens today do.

Yes! I think people are forgetting this is a new generation of New York teens—we’re not in 2007 anymore.

The original series was synonymous with tons of big-name designers—we instantly think of Anna Sui, Marc Jacobs, etc. What designers would you want to see make a few fashion appearances for this reimagining?

Well, already I’ve seen Christopher John Rogers in a formal scene, which is so exciting—he was one on my wish list. But also, I’m thinking Gucci is going to be a good one for this crew. And if we’re talking American talent, I can see brands like Monse and Pyer Moss working really well.

What the original did so well was mix in these high high-fashion moments with more contemporary brands, and I’m already seeing that here—a Cartier pin and Fendi bag with Schutz boots. And one of the characters is wearing Ivy Park sneakers! It’s so brilliant.

There’s been some criticism that this new version doesn’t feel as “glamorous.” But do you think glamour is defined differently in 2020 than it was a decade ago?

Oh, completely. I thought it was so funny, because the very first teaser image they ever released was just a Golden Goose sneaker, and people FREAKED OUT. I was like, “Come on! What’s more glamorous these days than a $500 sneaker that comes pre-beat up?”

It’s definitely about the mix, and fashion is so much about individualism today in general. The idea that a group of rich teens in 2020 are going to wear head-to-toe Chanel, or whatever, seems sillier to me personally. If you want that, Emily in Paris just got renewed.

Do you think teenagers and millennials today will still obsess over what’s worn in the new version like they did with the original? Everything featured on the show would immediately sell out after each episode would air.

I mean, I am not going to lie, I am already contemplating a few things from these pap shots. Teenagers, I think it could definitely hit the same way—I feel like resale is so big with that generation they’ll shop places like Depop to put their own spin on things.

The original show debuted in 2007! Why do you think Gossip Girl‘s influence is still so prevalent after all these years?

For the generation that watched while it was on, I think it really was among the last of appointment television. It hit right at the beginning of streaming, and I remember it was kind of controversial, because the show got huge numbers on the CW’s site or on iTunes, but that never counted toward its viewership, because streaming was still so new.

And topic-wise, it just hit at the right time—this show about obnoxious rich New York teens coming at the tail-end of the [George W. Bush] years and debuting right when the economy tanked.

It’s interesting that streaming has given it a second life with Gen Z. I can’t tell you how many people I know who are like, “My preteen or teen started watching on Netflix, and they’re just totally obsessed now,” or these stories about costume moments going viral on TikTok, Blake’s sweatpants, or the bag from the pilot, and such. It’s so funny to me, because that stuff is almost or over a decade old! It sort of feels to me like Sex and the City. I was just too young when it was on to watch, but I watched in college and became obsessed.

It’s definitely the closest cultural phenomenon we ever got to Sex and the City.

One hundred percent. Which, I think, is a combination of the writing, Eric’s costumes, and good timing. It feels like such a perfect time capsule of the late aughts to me and, of course, being set in New York.

I think we’re going to see a lot more of Brooklyn this time around.

I know they’ve said they’re really invested in that, so I’m interested to see where that goes. Like, no way these teens are kicking it on the Upper East Side all the time. 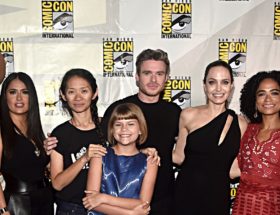 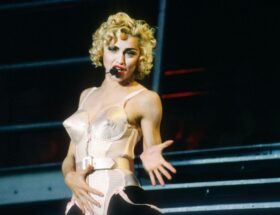