How the French Really Feel About Emily in Paris’s Style

There’s the slightly too spacious chambre de bonne; the endless sequence of overly attractive Frenchmen popping up like marionettes on every street corner. There are the personal-brand-building selfies with the onscreen likes ticker. And then, of course, there are the American-in-Paris Barbie outfits.

For anyone who has ever spent extensive time in Paris, however, the styling on the new Netflix series Emily in Paris is bound to be the most cringe-worthy trigger of them all. In the three years that I lived in France, I never once witnessed sartorial amalgamations like Emily’s on the streets of Paris, let alone French offices (Paris Fashion Week being the sole exception). In fact, my own prework routine often included the tried-and-trusted (and Coco Chanel–coined) adage “Before you leave the house, look in the mirror and take one thing off,” if for no other reason than to ward off commentary from my colleagues. Emily never takes anything off. Instead, she layers on accessories by the truckload, sending our eyes darting around the screen, absorbing fragments of her looks (The beret! The gloves! The white go-go booties!) without ever getting a sense of the full picture. As I gobble down the series with the greed I normally reserve for Haribo candy, the only thing running through my mind is this: I wish I could hear some French commentary on these looks. And so I reach out to a few Parisiennes to get their take.

“Hum…allergic? Epidemic?” quips Stéphanie Delpon, the cofounder of Parisian creative agency Pictoresq, before cutting back on the sarcasm in favor of more objective analysis. “To put it simply, Emily is not my style. It’s not the items she wears per se that I don’t like. It’s the accumulation—the pink foulard, the pink and violet hats, the curled hair, the superimposing of patterns and layers of flashy colors.” She adds that she would happily adopt some of the individual pieces that constitute Emily’s wardrobe, such as her collection of brightly colored Chanel bags (financed by the same clandestine trust fund of every other Darren Star–produced protagonist, presumably). However, like most Parisiennes, she would wear them as the key piece of an otherwise pared-down outfit, rather than as part of a kaleidoscopic jumbo puzzle. “The French style is all about creating space to breathe, carving out empty zones where beauty and character can emanate naturally.”

Mathilde Carton, editor in chief of French Grazia, is quick to point out that Emily’s outfits feel out of touch with reality, both from a sartorial and a practical perspective. “From a fashion point of view, they are too bright, too showy, too cartoonish, and not versatile enough to be worn through the day,” she says. She points out that the high heels that Emily struts around in on a daily basis lack any sort of functionality and practicality in a walking city like Paris, where traffic congestion has one running down Métro halls all day.

Some wonder if Emily’s outfits are intentionally tasteless to underscore the difference between her and the Parisian counterparts. “Her wardrobe is absolutely not in touch with her environment, exactly like her character who doesn’t care about fitting in,” says Carton. Emily’s sartorial nemesis appears to be her neighbor’s girlfriend, Camille, whose natural, fresh look is beloved by all. “From her pinstripe black blazer to her silver dress in the art gallery, to the polka-dot dress with Dr. Martens platforms, to her Anna Karina vibe en route to the countryside in her red convertible—the stylist did a really great job with her,” posits Parisian journalist Stéphanie Chermont.

Aside from Emily’s boss, Sylvie (who receives some critique for her sexy dresses, dramatic accessories, and overly domineering persona), the clothing of the other Parisian characters is deemed more or less passable. Far more criticism goes toward the way the French are portrayed. “For me, this is the Achilles heel of the series,” says Delpon, insisting that the show often makes French people appear silly, ignorant, and even racist. (“The flower-shop scene, really?”) “The French portrait is simply inaccurate and far too caricatural. It leads to a point where it’s sometimes ridiculous and painful to watch.”

The one thing that seems to ring true for them is the depiction of the fashion and luxury industry, which has seen a changing of the guard in recent years. “The show depicts, with a certain accuracy, the tensions within the industry between the vapid Instagrammeuses and the old media who still rely on a source of mystery and social hierarchy,” says Carton. Delpon, who herself runs a luxury creative agency, admits that certain scenes feel quite accurate: “I too have been in meetings where I found myself arguing the same cases as Emily. Fighting against male elitists projecting their fantasies on their clientele, seeing everything through their sexist masculine gaze, and crafting multimillion campaigns that women simply don’t relate to.”

If so, is Emily’s gusto and commitment to what she believes in, in regards to work or style, something to be admired?  Here, opinions vary. “In France, you don’t arrive in a new place with your confidence to criticize everything without even analyzing how things work here,” says Carton, adding that Parisians need time to open up to new people, especially those who don’t understand their etiquette. “This is so arrogant and individualistic. You can’t be a bull in our fine Limoges porcelain shop and expect us to admire you.”

Others commend the way in which Emily perseveres in spite of the endless critique. “It’s pretty cool that Emily stands up for herself and keeps going despite the difficulties,” says Chermont, noting that most Parisiennes are often more withdrawn, shy, and lack that kind of confidence. “She follows her ideas and desires to the end.”

“I value and respect the American ethos, the impetus, the movement, the daring, the enthusiasm,” says Delpon, noting that she always finds herself going back to her “inner Emily” (coined over a sojourn working in Miami) in moments when she feels herself submerged in French melancholy. “And you know what? It feels good! The energy it gives me is much more powerful than my Parisienne version!”

Ultimately, the takeaway here seems to be that channeling your inner Emily might not be such a bad idea after all, at least when it comes to attitude. Dressing like her…well, that’s another matter entirely. 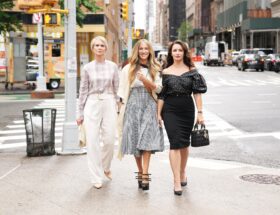