Brad Pitt clutched Jennifer Aniston’s wrist at Sunday night’s SAG Awards and almost 48 hours later, many people, myself included, are still not okay. Is it still news? I wondered on Tuesday morning, zooming in on The Photos yet again, my equilibrium still delicate. But of course it is, even in this frenetically fast news cycle; they have been “news” for the past 22 years. For as long as, say, Shawn Mendes has been alive, Brad and Jen, as they are colloquially called, have been a matter of public fascination and obsession. By now—15 years after their 2005 split—people have been dissecting their relationship for more than double the time they were even together.

In all fairness, Aniston and Pitt did not make it easy to resist them. When their agents set them up in 1998, she was the golden girl on the biggest show on “must-see TV”—who everyone wanted to be so badly, we all copied a haircut that, frankly, only worked on her. He was Tristan from Legends of the Fall, for God’s sake. At their reported $1 million Malibu wedding in 2000—replete with heart-shaped fireworks—Aniston promised to make Pitt’s favorite banana milkshakes. On Valentine’s Day in 2001, he reportedly filled Aniston’s Friends dressing room with 1,500 roses that spelled out “I love my wife.” They left romantics little choice but to be emotionally invested in them for decades to come.

Like approximately 99% of women in my Twitter and Instagram timelines, I too experienced a visceral reaction to the photos of the former super couple and newly minted SAG win……………ners appearing to crack up together on Sunday night. Was it just me, or did their eyes sparkle when they looked at each other? The familiarity in their faces struck me: Clearly, these were two people who knew each other, who once loved each other, and maybe still had love or at least lingering affection for one another. The now famous freeze-frame of Aniston with her back turned to Pitt read to some as a delicious fantasy: that she was the one walking away this time, while he pulled her back and tried to make her stay.

Like approximately 99% of women in my Twitter and Instagram timelines, I too experienced a visceral reaction to the photos of the former super couple and newly minted SAG winners appearing to crack up together on Sunday night. Was it just me, or did their eyes sparkle when they looked at each other? The familiarity in their faces struck me: Clearly, these were two people who knew each other, who once loved each other, and maybe still had love or at least lingering affection for one another. The now famous freeze-frame of Aniston with her back turned to Pitt read to some as a delicious fantasy: that she was the one walking away this time, while he pulled her back and tried to make her stay.

But these photos also fueled the fires of our collective fervor about the two exes. Maybe it’s potent ’90s/’00s nostalgia—or perhaps yearnings from children of divorce seeking stability—but imaginations ran wild at the sight of this brief but charged reunion. After all, both Aniston and Pitt are single now, divorced from Justin Theroux and Angelina Jolie, respectively. Could they—should they—get back together? Did the the drama we serially projected onto them…actually exist? It goes without saying that, as adults, they can (and should) do whatever they please. But the rest of us may want to think twice about rooting for a reunion.

In the heightened emotions of Sunday night, many people selectively forgot the couple’s long and sordid history. “You are misunderstanding your feelings if you think you want them to get back together,” Vanity Fair executive editor Claire Howorth tweeted. “You want her to be smoking hot, him to be single [and] perhaps chastened, a possibility to linger in the air for us, and them to carry on.” This spoke to the outsize interest in the wrist-clutch seen around the world: I want Pitt to want Aniston, but, especially in light of 2005, I do not want her to want him back. She’s been defined by the relationship for too long already.

Lest anyone forget: There seemed to be overlap between the official end of Pitt’s marriage to Aniston in 2005 and the beginning of his romance with Jolie, as confirmed when Jolie told Vogue in 2007 that the couple started to fall for each other while filming Mr. and Mrs. Smith in 2004. “It took until, really, the end of the shoot for us, I think, to realize that it might mean something more than we’d earlier allowed ourselves to believe,” Jolie said. That comment, Aniston later told GQ, “was definitely a confirmation for me of something that wasn’t quite confirmed at the time.” The blockbuster photos of Pitt vacationing with Jolie and her then three-year-old son Maddox in Kenya surfaced a mere three months after Brad and Jen announced their split. “The world was shocked and I was shocked,” Aniston told Vanity Fair that year.

Further seared in my memory is Pitt and Jolie’s “domestic bliss”–themed (!) W magazine shoot, released in July 2005, before his divorce from Aniston was even final. The shoot sparked arguably one of the most iconic celebrity interview quotes of all time from Aniston, who told Vanity Fair of Pitt: “There’s a sensitivity chip that’s missing.”

I am watching the so-called Pittaissance with great pleasure; I am cheering for him at the Oscars, and I respect the way he’s stepped back into the spotlight and discussed getting sober and the ills of toxic masculinity. It is lovely to see that he and Jen, forever our imagined celebrity best friends and/or parents, maintain an amicable relationship. But the question of whether they could—or should—get back together certainly isn’t as straightforward as any fairy-tale ending.

I’ll continue to indulge my opinions on celebrity romances. For instance, I think that, like Keanu Reeves before him, Pitt should take up with a self-possessed and talented grown woman and Aniston should consider a romance with an adoring younger man (by which I mean Timothée Chalamet). People—myself included—may never stop close-reading Jen and Brad’s interactions, but upon the latest look, I can see that that the best part of the viral SAG photo isn’t Pitt’s wrist-clutch; it’s the fact that Aniston isn’t looking back. 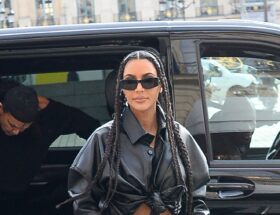 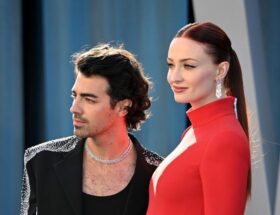