The only parts worth watching in Gervais’s uncensored speech were those painful reactions.

What are awards shows if not the perfect opportunity to join in on a harmless game of celebrity roasting courtesy of the ceremony’s emcee? Tonight’s Golden Globes host, Ricky Gervais—who secured the gig for the fifth consecutive time this year—held back nothing when it came to his opening monologue for the night.

Gervais’s roast was unafraid to go there, and with each new joke came another set of juxtaposed laughter with total outright discomfort from the audience. Two of the best celebrity jabs of the night were undeniably worthy of even the most subtle of chuckles, however. One was when Gervais called out Leonardo DiCaprio’s notorious … “preference” for dating women half his age: “Leonardo DiCaprio attended the premiere [of Once Upon a Time … in Hollywood] and by the end [of the film], his date was too old for him.” DiCaprio laughed at the mention, but notably no cameras panned to his girlfriend, Camila Maronne.

The second? Gervais calling out the entire celebrity attendance and many of their closeted connections to the late Jeffrey Epstein. “I know he’s your friend but I don’t care,” Gervais quipped. “You had to make your own way in on your own plane, didn’t ya?” Yikes!

The evening didn’t continue on without a jab back at the evening’s host. When President of the Hollywood Foreign Press Association Lorenzo Soria came onstage to present, he made sure to poke a bit of fun back at Gervais.

“Ricky, you keep saying this is your last year hosting? For God’s sake, please, put it in writing!” said Soria.

No celebrity was off-limits when it came to Gervais’s opening speech—thankfully for us, the innocent home viewers—the audience reactions were almost better than the monologue itself. We rounded up some of the most hilarious audience moments below. (The faces of Tom Hanks, Gwyneth Paltrow, and Chris Evans said it best.) 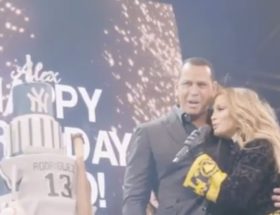