Co-Starring Michael B. Jordan, Snoh Aalegra’s New Video Is as Sexy and Stylish as It Gets

0
Home NEWS Co-Starring Michael B. Jordan, Snoh Aalegra’s New Video Is as Sexy and Stylish as It Gets

The cover art for Snoh Aalegra’s most recent album, -Ugh, those feels again, features a striking black-and-white portrait of the British singer’s stunning face. Aalegra appears almost Sade-esque, dressed in a simple black blazer and hoop earrings with her hair pulled back tightly. There’s nothing more adorning the image other than the large diamond-encrusted gold ring on her finger.

The new video for “Whoa” though, starring Aalegra and actor Michael B. Jordan, is a much more ornate affair however. The two play starry-eyed lovers whose romance unfolds in various fantasy locations, everywhere from the middle of the street to a dreamscape bathtub scene. Aalegra luxuriates in a bath with a towel wrapped around her hair—another unmistakable nod to Sade—while Jordan, who is sitting on a floor that’s transformed to resemble a cloud, reads to her.

The styling in the clip truly runs the gamut. Sitting alongside her beau on the street, the opening scene has Aalegra in a casual mood, dressed in a candy apple red Julia Seemann trench coat over a grey Stüssy hoodie. It’s only later that the fashion takes a more dramatic turn with ethereal, blue tulle pieces custom made by Kaduri Elyashar that seem to envelope Aalegra’s entire body, adding texture to an already standout bejeweled bra. To his credit, Jordan holds his own in a Rick Owens tank top and red Sacai trousers. Even if their courtship is just onscreen, it’s undeniable that the pair make quite the stylish couple. 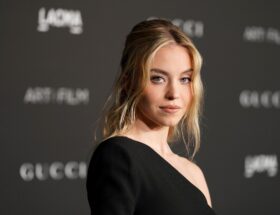 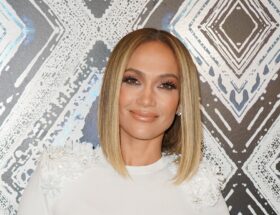