On Set of the Barbie Film: Every Photo of Margot Robbie and Ryan Gosling in Greta Gerwig’s Movie

0
Home CINEMA On Set of the Barbie Film: Every Photo of Margot Robbie and Ryan Gosling in Greta Gerwig’s Movie

It’s the gift that keeps on giving.

In the latest photos that have emerged from the set of the forthcoming live-action Barbie film, helmed by universally-millennial-beloved director Greta Gerwig, Margot Robbie and Ryan Gosling have once again transformed into their iconic Mattel counterparts—this time with the help of some brightly colored ’80s-era athleisure.

These aren’t the first photos to emerge from set. Earlier this month, paparazzi snapped Robbie dressed in a head-to-toe hot pink look that consisted of a neck tie, a vest, and bell-bottom pants embellished with stars.

Fans were additionally treated to a sneak peek during CinemaCon 2022, where Warner Bros. released the first photos of Robbie and Gosling as their characters. In the promotional pictures, Robbie rides in a hot pink convertible while dressed in a blue-and-white halter top. Meanwhile, Gosling underwent a transformation by dying his hair to platinum blond and is seen showing it off.

Robbie previously praised Barbie for promoting “confidence, curiosity and communication” through childhood, and empowering kids “to imagine themselves in aspirational roles from a princess to president,” per a press release.

“I’m so honored to take on this role and produce a film that I believe will have a tremendously positive impact on children and audiences worldwide,” she continued. 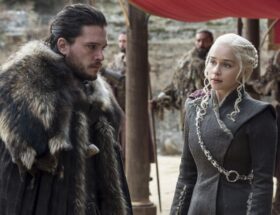 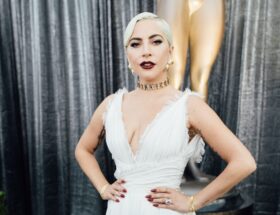