Wearing a punchily mismatched scarlet track jacket and yellow track pants, 25 year-old Leonardo Bianchi slipped down his face mask and picked up the mic. “Young Italian people who want to continue and develop the work of their fathers and grandfathers have a lot of passion and feel a lot of responsibility. So thanks to Dolce & Gabbana for giving us the chance to show what we do.” From their spot across a cloister of Florence’s Santa Maria Novella cathedral, Domenico Dolce and Stefano Gabbana beamed.

This was Wednesday afternoon, shortly before the first (menswear) show of an Alta Moda presentation that took Dolce & Gabbana’s post-lockdown show total to five; the two summer Alta Moda “virtual” shows (which reportedly sold strongly online), a July menswear collection shown in the grounds of the medical school whose COVID-19 research Dolce & Gabbana is funding, and this first sortie out of Milan. So many shows, and so fast? “When something terrible happens you feel it. And when you can start again you don’t stay at home crying; you start again.” So said Domenico Dolce before Thursday’s Alta Moda womenswear show.

Both shows were held both within government health guidelines—yes, there were Dolce facemasks to wear when required—and at municipal invitation: Florence’s mayor Dario Nardelli sat front row at both. In a speech before the first observed: “Here in Florence, from the bubonic plague emerged new ways of thinking about art, science, and philosophy… Florence is not only a center of the past but also of the present and the future.”

Joining the dots between past and present to chart a course ahead was the agenda behind an event that linked Alta Moda’s thousand-plus roster of international super-rich clients (150 flew to attend in person, the rest had access online) to a group of 38 small, family-run Florentine artisan bottegas. Dolce & Gabbana was introduced to these via Pitti Immagine, and the list included shoemakers, perfumers, leatherworkers, winemakers, basket weavers, silversmiths, feather workers, and a goldsmith. Works of artisanship from all of them were integrated in some way into the event: The post-womenswear dinner, for instance, featured a menu gleamingly flavoured with an edible gold leaf created by Giusto Manetti Battiloro.

This first menswear collection, though, was most densely seasoned with artisanal collaborations, and in style, it leaned towards the opulence of the original Florentine renaissance from which many of these creative traditions date. The track-jacket wearing Leonardo Bianchi’s family company, a three-generation specialist in scagliola named Bianco Bianchi that has provided hand-inlaid marble table-tops for both Gianni Versace’s Miami palazzo and the British royal family’s Kensington Palace, created floral and lion engraved brooches and amulets worn against crystal-set, fur-cuffed velvet topcoats. Miniature mosaicist Mireille Valentin contributed a series of butterfly and bird buttons worn on a shirt of damask silk. A series of handmade feather t-shirts were patterned with the Florentine fleur de lys, and a silk dressing gown came hand-painted with an exact reproduction of the vast Vasari fresco that decorated this show’s venue, the Hall of the Five Hundred in Palazzo Vecchio. Afterwards, the guests—all of whom were seated on distanced benches for reasons of safety and asked to wear Dolce & Gabbana-issued belted gowns for reasons of style—filed onto Piazza della Signoria to the fanfare of trumpets and a parade of medieval-uniformed musketeers, pikemen, and flag-bearers.

Cut to show two, for which the designers fast forwarded five hundred years or so to another landmark event in Florentine history. It was here in 1951 that the entrepreneur Giovanni Giorgini invited six prominent American tastemakers, including Vogue’s soon-to-be editor-in-chief Jessica Daves, to divert from Paris to see the works of a group of 16 Italian designers and couturiers at a presentation he entitled Alta Moda. Stefano Gabbana said, “After the second World War, that Alta Moda moment helped create a new kind of rebirth for Italy, through fashion.”

Dolce chimed in: “And Giorgini was closely connected to the artisans of Florence, who integrated what they had in their bottegas, even simple materials like raffia, into the work.” This Dolce Alta Moda collection, they stressed, had been executed by artisans of their own home bottega: A newly assembled corps of 50 employees, all aged under 30 and dedicated to various forms of embroidery, enabled this to be the first all in-house fabricated Alta Moda collection.

The result of their work was shown in the hillside garden of the Villa Bardini, just outside the city, and set to a dreamy Nino Rota-composed soundtrack. The gold-leaf dusted prosecco might have contributed, but what unfolded on the garden’s steps felt pretty dreamy too: a long and languid procession of fascinator-wearing models in a catalogue of expansively explored and extravagantly embroidered 1950s and early ’60s silhouettes. There were Sofia Loren-worth wiggle dresses in golden raffia to full-skirted Liz Taylor-as-Cleopatra-esque gowns in 3D floral-embroidered silk via split-skirt black velvet body huggers that Anita Ekberg would have swum wonderfully in. These were on-purpose references to classic cinematic costumes from the golden age of Cinecittà, a tandem-to-fashion Italian cultural flourishing that was embraced by the wider world. The models first descended Bardini’s steep stone garden staircase, then climbed all the way up it again—a feat made less fearsome by universally worn flats—before slowly arranging themselves in a group mise-en-scene in front of Monica Belluci, Kitty Spencer, and the rightly-rapt Mayor of Florence. As the last model took her position, the designers stepped out from the villa to mingle with the clients and sip more gold-seasoned proseccos as fireworks arced up from the banks of the Arno below.

Before Friday’s closing night “wine harvest experience” and dinner at the Cantine Antinori, the designers distilled the rationale behind this Florentine episode of their ongoing Italian tour. Domenico Dolce said, “Italy is based on artisanship, not only in fashion but in everything—food, wine, all aspects of culture. Every season we take Alta Moda to a new part of the country and we learn more and more, deeper and deeper, about our culture. The variation of singularities it represents is infinite.”

“And that difference,” added Gabbana, “is beautiful.” 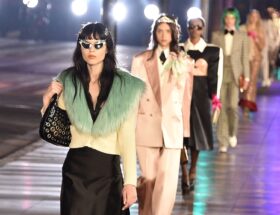 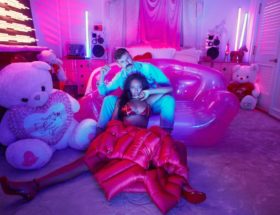 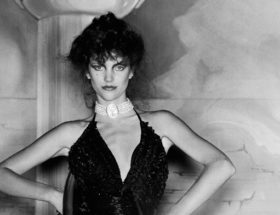