The Spanish princess was an outspoken feminist who never married.

The COVID-19 pandemic continues to affect people all over the world. In sad news this week, the first royal has died after testing positive for the virus.

Princess María Teresa de Borbón-Parma, the cousin of Spain’s King Felipe IV, has died at 86. According to People, María Teresa “was dubbed the ‘Red Princess’ because of her outspoken views.” The princess was a professor at Sorbonne University in Paris, and at Complutense University in Madrid. The princess never married and was a loyal advocate of women’s rights throughout her life.

Per People, María Teresa’s brother, Prince Sixto Enrique de Borbón, the Duke of Aranjuez, shared a tribute to his sister on Facebook. Along with a photo of the princess, the prince wrote on March 26, “On this afternoon… our sister Maria Teresa de Borbon Parma and Borbon Busset, victim of the coronavirus COVID-19, died in Paris at the age of eighty-six.” The family held a memorial service in Madrid on March 27. 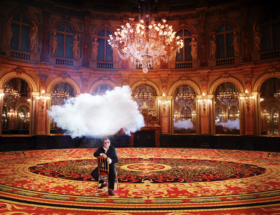