Billie Eilish Makes Her Debut at the Oscars in Chanel

Tonight, Billie Eilish made her debut at the Oscars in the most Billie Eilish way. The 18-year-old singer, who is performing at the ceremony, arrived on the red carpet, stopping for cameras in a Gen-Z pose with her tongue out, wearing a head-to-toe tweed Chanel look. But this wasn’t the classic skirt suit that the French house has long been known for. Instead, the ensemble was Eilish to the core. She wore an oversized white tweed jacket with matching tweed baggy pants and sneakers. Eilish accessorized the getup with a pair of white lace cut-off gloves that recalled Madonna during the late ’80s, but she put her own Eilish twist on the Queen of Pop’s mittens with her signature long square nails that were painted in black. The gloves were yet another homage to the brand — they were embroidered with sequins that spelled out “Chanel.” And the tribute didn’t stop there: Eilish also dotted her look with large Chanel double-C brooches and, for a final touch, she tied back her hair in a ribbon made from Chanel tags.

Loose-fitting clothes have long been Eilish’s style, which she faithfully documents on her Instagram account. But when she is on the red carpet, Eilish typically translates the XXL shirt-and-pant combination in a Hollywood way by adding shine and wearing logos. At the Grammy Awards last month, for example, she sported a full glinting Gucci monogrammed look, including a green turtleneck with poet sleeves. Tonight’s Chanel look was yet another example of Eilish sticking to her favorite silhouette while still creating a megawatt moment. 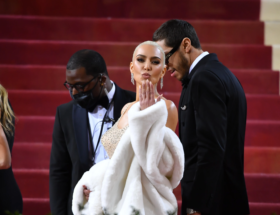 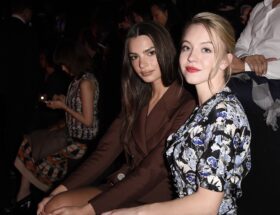 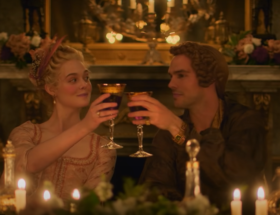