Tonight, the Duchess of Cambridge attended the Diplomatic Reception at Buckingham Palace. The annual event attracts 1,000 guests, from ambassadors to government officials. With a dress code of white tie, the Duchess wore a navy Alexander McQueen gown—and full royal regalia.

On her head was the Lover’s Knot tiara. The priceless piece is a favorite of the duchess, who last donned the diadem during the state banquet for President Donald Trump and First Lady Melania Trump, in June 2019. Made by Garrard in 1913, it contains diamond arches adorned with drop pearls.

The Lover’s Knot is often associated with Princess Diana, who was photographed wearing it on many occasions. As a result, it has arguably become the most famous tiara of the British royal family.

Middleton paired this rare artifact with dangling diamond earrings and a matching necklace.

And here, she wore the Royal Victorian Order’s badge, a white enamel Maltese cross with a Tudor Crown, for the second time. Pinned to her chest was the Royal Family Order of Queen Elizabeth II, a yellow badge given to the female members of the British monarchy. She first debuted the sash and its accompaniments at the Trump dinner, where she walked through the halls of Buckingham Palace accompanied by U.S. Secretary of Treasury Steve Mnuchin.

Altogether, the sash symbolizes the Queen’s high regard for her granddaughter. 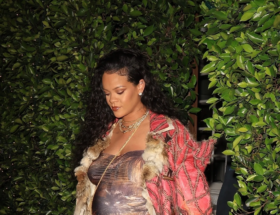