Angel Olsen on Her Bespoke, Old World Vision of Fashion

When I meet Angel Olsen at a bar in Greenpoint this past August, she’s a bit burnt out. She’s just received some bad news regarding a friend of hers; she’s also in the thick of promoting her new album, All Mirrors, and beginning a lengthy tour, which extended to playing a series of headlining shows in Brooklyn this past weekend. “I keep having to switch gears from talking about the record, doing photoshoots, trying to look interesting—trying to wear beautiful dresses and get into it—but I also get depleted, because I know I have to go home and learn how to program my synth and actually do the fucking thing,” she says.

In spite of this fatigue, the Asheville, North Carolina-based artist excitedly shows me the knockoff Vogue T-shirt that she’s wearing—a handmade, abstract black-and-white design that her friend made and framed with the classic Vogue lettering, worn in anticipation of speaking with me. She also lights up when showing off her new tattoo, which she got in Lisbon during her sole vacation of the summer. “I went with my best friend who’s a DJ, and he has this little chihuahua. We were just in the streets singing fado and we both got tattoos—this is the first I’ve ever gotten.” It’s based off a post she saw on the oddball Instagram account History Cool Kids. “A Swiss taxidermist created a 3D model of this Siberian princess whose body was completely preserved. She was 2,500 years old and covered in tattoos. They found some weed next to her, and they found out that she had breast cancer, so she was smoking to ease the pain. It’s a really powerful image and it just kept coming back to me,” Olsen says. She thought she was going to get a mini labyrinth or a compass tattooed on her arm, but instead she went with the swirling, almost Pegasus-like design that the mummified princess had etched into her shoulder.

Over the course of an hour, Olsen ricochets from one topic to the next—she enthusiastically tells me about a book that she’s just read, A Little History of the World by Ernst Gombrich, as well as her teenage obsession with women surrealists like Leonora Carrington and Remedios Varo. Their influence has come to bear on the otherworldly garments she’s worn both in music videos and on stage of late; notably in the black-and-white, gothic visual for lead single “All Mirrors.” She also recalls her favorite secret spots around her Asheville home: in particular, an old, unoccupied house overgrown with vines set on a mountainside above a creek. “My whole thing is just getting lost around Asheville during the day. I’ll get up at 7 a.m. on a rainy day and just do that shit forever.”

Her style references have also skewed in a more esoteric direction. “I really like things that are out of fashion now,” Olsen says. “Fashion is so elegant, so why aren’t people making things the right way anymore? No one cares about sewing anymore. No one cares about structure. Why can’t we make something classic that’s also big? Dior did that all the time, and I don’t know why people do that as much anymore.”

By working with her friend from Asheville, artist Bailey Raynor, on custom garments, Olsen has found a workaround for this dilemma. The duo have been crafting pieces for Olsen to wear onstage together since 2016, often working into the early hours (albeit out of necessity). “We’re both so busy that when I get to see her it’s either super late at night, at 1 a.m., or at 7 a.m. It’s a really intimate hour-long sesh of talking and catching up and doing the measurements, her telling me about her life, and then it’s done, and we don’t see each other for weeks,” Olsen says of their collaboration.

Raynor and Olsen’s ongoing collaboration has evolved to keep up with Olsen’s shifting sartorial tastes. For 2016’s My Woman, Olsen used fashion to subvert her sad girl public persona—in the self-directed video for “Intern,” for example, Olsen donned a tinsel wig, a moment of levity that media outlets fixated on in a way that surprised her. In a shift that reflects the darker sound of All Mirrors—which contains plenty of melodrama thanks to the 12-piece string section that anchors the record—Olsen’s visual world has also taken a more surreal turn. “Everybody wants to wear a sweatshirt that says Gucci on it, or everyone wants to make something like sweatpants, like something really modern and normal, and [today on a photoshoot set] we were trying to go into this really surreal, fucked-up zone and bring back eye makeup and the goth romance and get some candles out and listen to Kate Bush,” Olsen says.

Olsen has brought this gothic touch to the stage, too. Raynor designed the hand-beaded, floor-length black fringe dress that she wore to her recent performances at Brooklyn Steel, drawing from her current mood board. Olsen can forensically chart the trajectory of these fashion obsessions—she first got really into Iris van Herpen, then came an interest in knits, before quickly becoming enamored with everything fringe. “With my small frame and being someone with a shape, I’m always inspired by ’40s Dior, but I find myself loving vintage Thierry Mugler as well,” Olsen says of her current tour wardrobe. She also stumbled upon old Russian headpieces, which she incorporated into her visuals. “I found all these beautiful Russian kokoshnik headpieces on the internet. In the olden days, women in Russia would wear them to show people at a party to represent that they were married and spoken for.” Olsen then enlisted her friend from Asheville to make a modified version of a kokoshnik, fashioning one entirely from zip ties and spray paint. In spite of its modest materials, it looks completely regal—Olsen wore it on The Tonight Show, too, turning it into an otherworldly topper that added some shine to her structured, beaded and fringed black dress.

Olsen’s wardrobe might be grounded in these intimate, DIY collaborations with her friends, but she’s trying to push herself further. As just one example, she recently hired a fashion consultant; a first for her. “Given my work with Bailey, I felt weird even having a fashion consultant, and I told her about it beforehand,” Olsen says. “I’m still so low on the totem pole as far as musicians are concerned—Solange or somebody else has already worn the dress that I’m trying to get—so sometimes it’s just better to make stuff and start from scratch, or work with someone who’s a new designer.” Olsen says, hinting at the next stage in her ever-changing, carefully considered image. “I think I’m going to go that route from now on: try to find people who want to build something together, and who are up and coming,” she says. “Just like me.” 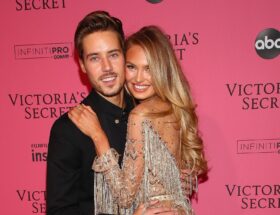 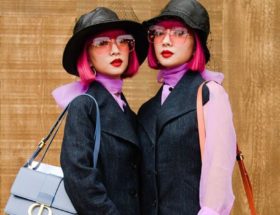 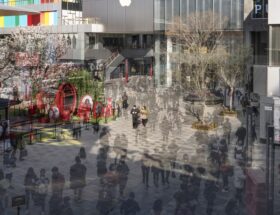