All the Glamorous Details From Priyanka Chopra’s Birthday Party

Specifically, wearing a sparkling red minidress and embellished Judith Leiber bag in the shape of a lipstick. She showed off her festive look on husband Nick Jonas’s Instagram Stories, while the Jonas Brothers’ song “Burnin’ Up” played in the background. “Birthday girl in red,” Jonas wrote.

Then it was off to Komodo Restaurant in Miami’s Brickell neighborhood. The hotspot serves up a wide variety of pan-Asian cuisine (sushi, dumplings, Wagyu beef, Peking Duck, and Korean fried chicken are just a few of the things on their menu) in a chic, club like setting—this is Miami, after all. Upstairs, there’s a lounge with red leather booths, art by Mari Kim and Hebru Brantley, and pulsating mood lighting. Club kids will recognize the name of the Komodo’s owner, David Grutman, the man also behind South Beach hotspots LIV and Story.

Chopra’s fête included a lavish cake. The four-tiered, red confection was adorned with metallic embellishments, a “Priyanka” cake topper, and massive sparklers. The actress wore a headpiece that read “Birthday Girl.” In photos from the event, she cheerfully gazes up on the creation while Nick Jonas, dressed in a yellow button-down, looks on. In another, the couple takes a celebratory shot.

Earlier that day, her husband posted a sweet birthday tribute on Instagram. “Light of my world. My whole heart. I love you baby. Happy birthday,” he wrote. 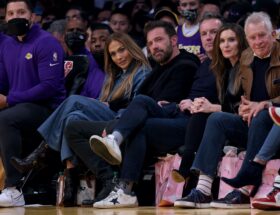