“Growing up, I felt like I needed to wear makeup to cover pimples and feel more attractive,” says Surfbort frontwoman Dani Miller, the scream-sing darling of the punk world whose unconventional look stars in Gucci’s premier beauty campaign. (She shares the space with models Ellia Sophia Coggins, Achok Majak and Mae Lapres.) “But if you switch that idea around and put some power into your flaws,” she says, mouth stretching into an endearingly crooked, gap-tooth smile, “they can become your best assets.” It’s certainly true that once you’ve taken in the lipstick-stained close-up of Miller’s wonderfully idiosyncratic teeth, and the imperfect, caffeine-tarnished enamel of her castmate Coggins—glorified within Martin Parr’s glossy 80s-feel imagery—you begin to feel strangely more accepting of your own imperfections.

It’s a compelling and timely sentiment. On the face of it, the objective for Gucci’s eclectic visionary Alessandro Michele, may be to launch three charming lipstick categories in 58 delightful shades—Rouge à Lèvres Satin (with a satin finish), Rouge à Lèvres Voile (with a sheer finish), and Baume à Lèvres (a silky smooth lip balm with a translucent finish)—but refreshingly, he’s chosen to do it while conveying the notion that makeup needn’t be intimidating, or a tool to hide behind. “The idea is to create a humanized point of view, however strange,” Michele says. “But the strangeness is human, so it’s beautiful.”

That democratic approach has lately been percolating on social media and beyond, but this is perhaps the first time a major house has stamped their logo onto lasting imagery to back it up. After all, most people grew up with makeup insecurities, like Miller did: “I’d wonder, do I have to fit into a super-femme mold to wear it? Is it working with my teeth and my mouth?” she recalls. “But the message now is you can wear any color with whatever features you have and just have a blast with it.”

As a die-hard lipstick fan, Miller’s go-to shade is the striking Agatha Orange, a satin finish stain encased in gilt packaging that’s etched with an art deco-inspired pattern (there’s a retro floral wallpaper print for the voiles, and eggshell blue cases for the balms). “It’s bold,” she says of the reason the color excites her, “and with my smile being so wild and dorky, I just love putting color around it.” Michele found inspiration for the collection in the screen sirens of the bygone Hollywood era (Joan Crawford, Jean Harlow, Bette Davis, and Greta Garbo among them), but sought to reimagine their striking beauty for a modern age. After all, Miller doesn’t attempt to embody Crawford’s take on her chosen vibrant hue, drawn from the 1951 movie, Goodbye, My Fancy. Instead, she makes the Gucci version of that reddish orange shade her own, dabbing it on her lips and juxtaposing it with daring, thick swipes of Gucci’s Crystal Black on her lids to create an irreverent, punkish cateye (much like Gucci’s Global Makeup Artist, Thomas de Kluyer did in the campaign). As the 26-year-old songstress puts it: “Your flaws are not actually flaws. Yes, there are traditional beauty standards, but if you don’t fit into that, you can still have a party with your quirks and celebrate yourself.”

The Gucci Makeup lipstick collection will be available for $38 each from May 6, exclusively at the Saks Fifth Avenue New York Flagship and nationwide on May 29th on Saks.com and Saks Fifth Avenue. 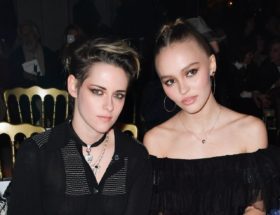 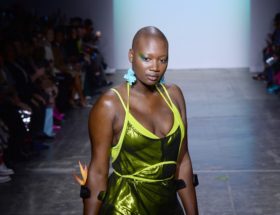