He dressed the star in six extreme looks for her first Paris Fashion Week.

By the end of my 45-minute phone call with stylist Brett Alan Nelson, I learn that Doja Cat’s given name is Amala. I didn’t know this, but I should have; it’s the title of her first album. But the Amala on that cover doesn’t really resemble the Amala everyone knows now, the one who went viral in 2018 for singing “MOOO!” (a.k.a. the “Bitch, I’m a cow” song) and who sat front row at Balenciaga just a week ago looking like she had come straight from a bloody brawl, with red makeup splashed across her right eye. Some people think being publicly known by your first name is the peak of fame, but Doja Cat is one of the most famous stars in the world. And no one really knows who Amala is.

Nelson is Doja Cat’s creative director. For this Paris Fashion Week, Doja Cat’s first ever, he styled her for six shows: Thom Browne, Balenciaga, Vivienne Westwood, A.W.A.K.E. Mode, Givenchy, and Monot. “When it comes to Fashion Week, sometimes people obviously want to be direct and just wear the designer for the show. They want to look good,” he explains over the phone while taking a leisurely walk through Paris, two days after the shows have ended. “But we wanted to tell stories, and we wanted to do things a bit more editorially and theatrical—to, you know, break the Internet and make headlines.”

Some headlines from the past few days, where Doja Cat’s Paris Fashion Week looks dominated the fashion news circuit: “Doja Cat to Critics of Her ‘Ugly’ Gold Makeup: ‘Wasn’t Trying to Look Sexy,’” “Doja Cat Explains Her Black Eye & Busted Lip Look at Paris Fashion Week,” and “Doja Cat Is Really Going for It.” The looks Nelson and Doja Cat put together for Fashion Week were, in Nelson’s words, “a little fucked up,” and the response was expected. He is, he says, completely unfazed by Internet critics.

“I strive to be on the worst-dressed list,” he says. “Because I know if someone is like, ‘We don’t like it,’ they just don’t get it.” The girls who get it get it, and the girls who don’t just don’t know Doja Cat. This is, once again, a celebrity who rose to fame as a meme, wearing a cow costume with french fries in her nose. She doesn’t care what you think, and neither does Nelson.

“If you want to be safe, you can hire anybody in the world to do my job,” Nelson adds, his disdain audible on the word safe. “Because I don’t want to do that.” Thankfully, he and Doja are aligned—“Neither of us like surface level”—despite sometimes butting heads on particular looks. The goal for the week wasn’t just to get dressed to sit front row, but to let Amala be anyone but Amala. She didn’t even really look like Doja Cat.

Each show was a new character. At Monot, she looked like an alien mime, maybe sent to this planet to silently seduce with a black bandeau top that looked like a censor strip. At A.W.A.K.E. Mode, she appeared to be a gold statue. At Givenchy, she became a punk rocker with piercings for eyebrows. “Each of the looks was its own moment and story,” Nelson says. Some of the stories they told aligned so perfectly with the ones that unfolded on the runway, you’d think it was planned. At Balenciaga, models were dressed for the “war” Doja Cat looked like she had just emerged from. Nelson recalls the serendipitous moment as one of the highlights of the entire week: “We saw Demna afterwards, and he was shocked when he saw the makeup, because obviously, she had the same face that they did during the show.”

Nelson turned looks, too: “This Fashion Week was fun for me, because I was able to dress up with her, so we were telling stories together.” In street style photographs from the week, Nelson and Doja Cat are easy to spot, even in a crowd of peacocking guests. They almost look out of place, as if they’re starring in an entirely different play than the rest of fashion’s cast of characters. Nelson talks in circles trying to decide what his favorite look was, but has to admit that Thom Browne was “really cool.” Probably because it was so new for him. “It was very liberating to be in a skirt. I’ve never worn a miniskirt before, but I loved it,” he says.

Typically, stylists stay strictly behind the scenes (toward the end of our call, Nelson even says, “Me? I don’t matter.”), but Amala—not Doja Cat—inspired Nelson to operate differently than he’s used to. “Doja and I have worked together for almost three years now,” he says. “And I’ve been very careful in my job to not befriend the artists that I work with, just because it is a job for me. But it’s been very difficult for me to not fall in love with Amala, the person, because she’s so special. She’s become like my sister.”

It’s at this point in the call that Nelson starts to use Doja Cat’s real name. “I want to make sure that every look feels authentic. I never want to force her into something! Even though there are times that we butt heads, it’s always her.” It’s always Amala.

But the thing about Amala is that she isn’t even Amala most of the time. “She’s such a chameleon,” Nelson says.

Maybe the pinnacle of fame is to be so mythical you don’t seem capable of possessing a real name. To be so fabled the only looks that make sense are the ones that look like they came out of a fairy tale (the kind you realize later in life is pretty “fucked up”)—not unlike another two-word pseudonymous celeb who most people don’t realize has a standard name.

“It’s like the effect that Gaga really had in the beginning of her career,” Nelson says, trying to sum up the week at the end of our call. “Amala can really do anything. Like, she could show up in a trash bag and everyone would talk about it. Or she could show up in a couture gown and have a diamond crown on her head, and everyone would be like, ‘Oh, my God, this is genius.’” 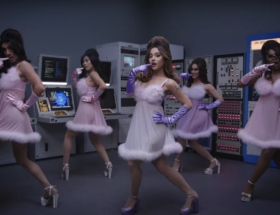 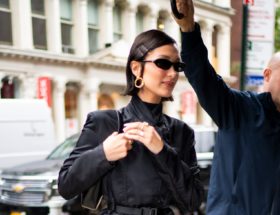 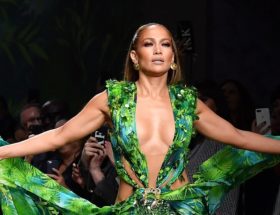