But according to Alessandro Michele, no two individuals on the runway were truly identical.

One of every 42 children born is a twin, and of that already small number, an even smaller percentage are apparently born to be Gucci models. Today in Milan, Gucci creative director Alessandro Michele sent 68 sets of twins down the runway in his Twinsburg show, which was inspired by his mother, who is also a twin.

He concluded his show notes with a dedication to his mother, Eralda, and her sister, Giuliana: “To my twin mums, that were able to comprehend life only though the presence of the other.” During his unconventional childhood, Michele wrote, he was obsessed with their twinship; he used to tell teachers he had two mothers, “They were magically mirrored. One multiplied the other. That was my world, perfectly doubled and doubled.”

Their relationship made him fascinated with the double. The magic of twins is that the identicalness feels impossible. They shouldn’t look the same, but even though they do, it’s all just an illusion, or “cracked symmetry” as he calls it. Genomes be damned. No two people are perfectly identical, even if they comb their hair and dress the same way and share a large chunk of the same DNA.

This concept is what inspired his decision to cast pairs of twins and send each set down different runways that were reflections of the other, in an attempt to show how clothes can duplicate. When you fall in love with a piece of clothing, what feels magical is often its singularity, which can feel shattered once you see on another person. It’s the reason vintage shopping and archival design have become so popular in recent years. No one wants to look like anyone else these days.

Michele wanted to challenge the assumption that one-of-a-kind pieces are the end-all and be-all of personal style. Another person doesn’t become you once they put on the same article of clothing as you. The magic of fashion is how it comes to life differently on every individual. “The same clothes emanate different qualities on seemingly identical bodies. Fashion, after all, lives on serial multiplications that don’t hamper the most genuine expression of every possible individuality.”

He also seemed to be speaking to those of us who are so obsessed with idiosyncratic style that when we see someone wearing the same thing, we take it as a personal attack. His message: Get over yourself! Twins know they’re not the center of the universe because they live with another self. But even without a genetic copy walking around, none of us are.

There are 7.7 billion people on this earth. Some are born twins, some are born Gucci models, 136 are born to be both, but none of them will ever look exactly, truly, one-hundred-percent the same in a pair of Gucci leopard tights worn underneath a sheer blue pleated Gucci gown. Everyone is a main character in Gucci, no matter what science or fashion has to say about it. 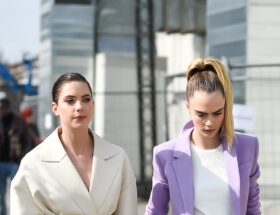 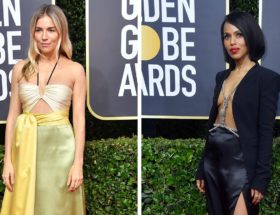 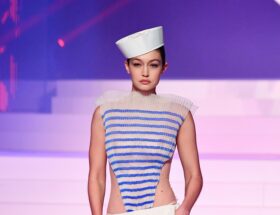