All the looks fit to print…

Paris is widely considered to be the capital of the fashion industry. Thus our final stop on the Fashion Month circuit is home to some of the biggest luxury labels from Christian Dior to Louis Vuitton, and bright young talents too. Follow our recap of the best that Paris Fashion Week spring 2021 has to offer.

Right out of the gate Olivier Rousteing’s latest felt like it was decidedly meant for a non-quarantining life. There was neon, cathedral shoulders, and so many sparkles, all high-octane elements that typically need an audience for maximum appreciation. While it’s no surprise that Balmain’s sexy attitude wouldn’t put up with being housebound, there were other concessions that made you think the designer’s gotten used to a slightly more casual life as of late (like bike shorts and sneakers). And in a really rather elegant styling moment, the entire set of sparkly evening pieces presented at the end were shown with bare feet, a choice that let the fluid garments take center stage but also felt touchingly real (black tie at home feels bohemian, but the vibe is best accomplished sans shoes). —Leah Melby Clinton

The new Kenzo under Felipe Oliveira Baptista is made for the era of social distancing. The designer showed his debut collection for the French house last season inside a hermetically sealed plastic bubble, and the please keep your distance vibes continued for spring thanks to the giant netted beekeeper’s hats that covered nearly half the collection. “Beekeepers with their mesmerizing clothings and hats that echo so strongly the fragility and distance imposed and needed today,” Oliveira Baptista explained in his show notes, also noting that the collection was “an ode to the bees, the regulators of the planet.” That focus on nature’s all important pollinators—who are facing an existential threat due to climate change—also came across strongly in archival Kenzo poppy and hortensia prints given a digital “crying” effect. —Alison S. Cohn

The Dutch lockdown last spring found designer Dries Van Noten asking big questions: What’s going to be important in the future? Is there still going to be fashion in the future? The answer, according to the spring 2021 lookbook he shot on a beach in Rotterdam with artist Viviane Sassen, is a resounding yes. “I wanted really to make something that was ‘fashion optimistic,’” he says. That motive translated into a vivid profusion of mood lifting color; gone were the usual heavy heritage jacquards in favor of floating cotton organzas. Van Noten drew inspiration from the color-drenched experimental films of Len Lye, an early 20th artist who painted directly on celluloid, decades before the psychedelic movement. What appear as simple stripes on balloon sleeve dresses, belted coats, and bathing suits (a first for the brand) are in fact shards of light cast through a louver shutter, captured, and printed. Van Noten put it best: “The total look of the collection looks more simple but it’s more in depth.”
—Alison S. Cohn

If Thebe Magugu’s spring 2021 Counter Intelligence lineup, which oscillated between sharp, tailored pieces and fluid dresses, seemed to have multiple style personalities, well, that’s because it does. “Our immediate picture of spies is largely informed by their portrayal in popular culture—slim, ostentatiously demure, fashionable and aloof,” says the Johannesburg–based designer and 2019 LVMH Prize winner. “Truth is, spies are all around us, they are our beloved teachers, friends and family members.” Magugu’s collection is an ongoing exploration of the traditions, culture, and racial dynamics of South Africa, and this season took its cues from a series of interviews he conducted with former spies who worked with the country’s old Apartheid government. Prints feature authentic documentation including a mugshot on a cotton blouse and and trompe-l’oeil polka dot pattern on a handkerchief hem dress that was made from fingerprints. —Alison S. Cohn

As we all collectively look to the future of fashion, it’s become obvious that we’ll need our clothes to work harder and do more, but also up the level of pure pleasure we receive from wearing them. Coperni has met that two-fold challenge head on, revealing a technical jersey that fights bacteria, UV rays, and wrinkles while still allowing itself to be beautifully manipulated into slouchy trousers and tailored jackets. A sporty vibe runs throughout too, with zippers, paneled leggings, and high-shine shorts that would befit a boxer in the ring. Even though the collection was shown on a Parisian rooftop sprinkled with rain, there’s something decidedly California-girl about it (doubly so when you remember that built-in sun protection). —Leah Melby Clinton

If Marine Serre’s spring collection feels like the wardrobe from a sweeping dystopian saga, it’s because it is, more or less. The designer created a short film exploring “the urgent need for change and adaptation” as an accompaniment to the collection, handily casting our clothes as tools for affecting tangible change (she was early to the face-mask-as-fashion too, showing them for fall 2019). Serre focuses on the interplay of creativity and practicality, hiding deceptively sleek silhouettes behind bold styling and experimenting with upcycled and repurposed fabrics such as biodegradable nylon and recycled moire. A monochromatic jacquard highlights expertly tailored lines: seen through Serre’s vision it’s fit for a corporate cyborg, but it’s also just a beautifully cut jacket. And a moonfish skin pattern fluctuates in size to create the illusory affect of out-of-this-world curves (”a utopian augmented body” per the show notes). Peel back the costumed layer and it’s simplicity you’ll find. —Leah Melby Clinton

From razor-fine cutouts to gathered pleats, Alaïa is all about precision, and even the breeziest of this bunch have meticulous details ready to captivate. A square-neck trapeze dress uses vertical scallops for a delicate flutter; a crisp shirtdress distinguishes itself with a vented back and pleats cinched by a wide belt; and a halter dress shocks with a crimson lining. So although this spring is slightly more casual than what we expect from the label that practically defined bodycon, everything is geared toward the woman who can’t have her basics feel basic. There are more day dresses and shorts than longer, formal silhouettes, and one wonders if that was a decision made in response to the shopper’s revised social calendar where gatherings are smaller and less grand in nature (though every bit as chic). Even the images themselves, shot on Parisian streets, speak to a future time when she dresses for the sidewalks, not the soirées. —Leah Melby Clinton

Fashion and intellectual culture often meet at Dior, and Maria Grazia Chiuri’s spring 2021 collection, conceived during a time of vast societal transformation, was no exception. The designer, who lives in Rome, drew inspiration from “To Cut is to Think,” a 1997 essay written by the late Italian art critic and curator Germano Celant, who passed away from COVID-19 earlier this year. “Cutting structures language, but also clothing,” wrote Celant. “It is an intervention into the traditional conceptions of representing and seeing a body or thing, and thereby produces a new sensation.” Chiuri brought a “new sensation” to founder Christian Dior’s iconic Bar jacket through the addition of laces that allow it be cinched tightly to achieve the classic wasp-waist silhouette, or worn loose, over lace dresses and wide-leg trousers. She also looked to the personal wardrobes of two of her favorite female authors—Susan Sontag and Virginia Woolf—for the reinvented simple white shirt (by turns, it became a tunic or a dress) and ample coats in heathered fabrics, which both featured prominently throughout the collection. The later were styled with coordinating peek-a-boo bralettes, a very Chiuri pairing. —Alison S. Cohn

Grace Wales Bonner showed her spring 2021 collection via an original film by the Jamaican artist Jeano Edwards and with a digital publication titled Reflections on Essence. Bonner began a three-part series of collection that explores the Diasporic connections between Britain and the Caribbean last season. Essence is the second in the triptych, and explores the early eighties dancehall music scene in Jamaica. For the menswear in the collection that meant reworking and reinterpreting Adidas tracksuits and other sporting sets. The women’s looks are more polished with shirting and tailoring interspersed with more languid silks and crochets, all done in a soft and easy palette of white, cream and black. —Kerry Pieri

Cecilie Bahnsen is a sort of intellectual romantic, a designer who leans into an ethereal beauty while imbuing it with something steady and enduring. For this collection, the Copenhagen-based designer had “a woman on a journey across a landscape” in mind, and was inspired by Hashimoto Shoko’s ’70s black and white portraits of Goze musicians, James Turrell’s immersive light installations, and P. S. Krøyer painting of a summer night by the sea in Denmark. These aren’t just esoteric ideas: the Turrell colors show up in bright pink and green pieces. But the collection is mostly black and white, which calls to mind the black outfits worn by the blind Japanese women musicians in the photographs and the dreamy white gowns in wome two women walking on the beach in Krøyer’s painting. The looks are all a bit dreamy, like they might float off if the breeze hits just right. —Kerry Pieri

Nanushka designer Sandra Sandor titled this collection Natural Order, delving into a theme the designer has long considered: the relationship between humans and the natural world. She created the collection to be approximately 48% sustainable, with her signature oversized vegan leather jackets mixed with knitted suiting and backless dresses, in a landscape-inspired palette of browns, greens, and sky blue. Shoes, bags, and hats bring the drama that her legions of Instagram-obsessed fans will fall in love with. —Kerry Pieri 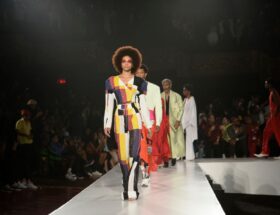 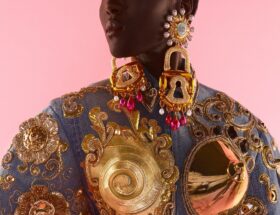