This story is part of a series, Past/Present.

I was in my first year of university in Toronto when Mugler’s fall 2011 show happened. While my friends were hanging out in each other’s dorm rooms like normal students, I was staying in to livestream a fashion show that was happening in faraway Paris. At the time, I was a huge Lady Gaga fan—a “Little Monster,” as fans of the freaky-deaky pop star called themselves—and it had been announced that Mother Monster herself would be making an appearance in the show. The label’s new creative director, Nicola Formichetti (Gaga’s then stylist and collaborator) was making his womenswear debut that season, and the possibility of a surprise Gaga performance was all I needed to know. I cleared my schedule.

Held at the Gymnase Japy in Paris’s 11th arrondissement, the show featured was a raised runway that was lined with wooden arches, built to resemble a cathedral. The theatricality of the setting matched the clothes, which were an ode to Thierry Mugler originals. Among other designs, Formichetti showed pantsuits with exaggerated shoulder peaks, which were not unlike the sharp prosthetic cheekbones Gaga also wore that year (it was her Born This Way era.) About 10 looks in, Gaga herself emerged. As her song “Government Hooker” played, the pop star stormed the runway in a black bra, mesh bodysuit, towering platforms, and a triangular hat—smoking a real-life cigarette to boot.

I remember squinting hard trying to see her on the grainy livestream, living for every second of it. Nicole Phelps noted in her review, “Gaga had better balance on her platform wedges than many of the professional models did on their own precarious heels.” She really did put the other models to shame: I remember Gaga’s second all-white look even more vividly; she strutted down that catwalk and whipped her stole around with delicious fervor. The late Rick “Zombie Boy” Genest, another Gaga collaborator, also walked the show, bobbing his head around and displaying his captivatingly eerie stare.

For me, what makes this show so ahead of its time was its brash combination of fashion and pop culture. In the early 2010s, celebrity cameos were something special; they were still a real treat, and seeing Gaga on the runway was something people talked about for days after. (I remember texting with my friends back home in a small farming town in the middle of Canada about it!) The execution of Gaga’s surprise superstar appearance was fittingly chaotic; it had a sort of unplanned feel, as if she had appeared on the runway out of nowhere, smoking a cig like she had just rolled in off the streets. It was nothing like the polished, mega-planned productions we see nowadays.

What’s funny in retrospect is that Formichetti’s debut was largely considered a mega disappointment. He only lasted two years at the label, exiting in 2013. I remember his clothes from this collection fondly: Gaga wore these designs out on the street religiously, and with every sighting of her on the streets, I would head to Style.com (now Vogue Runway) to see which exact Mugler look she had worn. They’re seared into my memory. If that makes me an unhinged Gaga freak, so be it, but that’s what makes this show such an iconic one for me—and one that still very much holds up today. Put your paws up, baby! 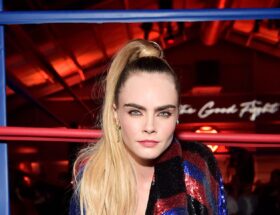 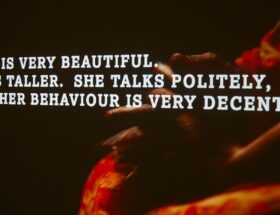