In a city where the typical dress code is jeans and sneakers, there are few things men in Los Angeles will actually put on a suit for. However, The GQ Men of the Year Awards at the new West Hollywood Edition Hotel was an exhibition of creative suiting for nearly every attendee; for once, it was the underdressed who looked out of place.

The evening began at the Edition’s Ardor restaurant, and attendees included a long list of well-suited men for the occasion. Walking through the walnut-clad space, it was impossible to miss Kevin Bacon in a grey suit with a black t-shirt looking effortless sitting next to Al Pacino in a navy coat and Edi Gathegi, styled by his wife, Adriana, in a Gucci suit and Cos turtleneck.

Jon Hamm, in a windowpane plaid, chatted with Edward Norton, who looked sophisticated in classic navy, as did Charles Melton, who wore a monochromatic Prada look with a double-breasted navy jacket and navy dress shirt. Even streetwear icon Jerry Lorenzo came out in a loose-fitting black Zegna suit with Celine slides.

On the edgier side, there was Lil Nas X in turquoise blue snakeskin jacket and pants, while Rashaad Dunn, who styles himself, got creative in a rust-colored velvet tuxedo jacket topped with a chocolate-colored faux fur coat, and Billy Idol turned heads in a wide pin-striped suite with rock-and-roll bondage adornments. It was also impossible to miss Lucky Blue Smith in a head-to-toe crimson look by DZOJCHEN and Louboutin loafers.

GQ editor Will Welch, keeping things simple in a classic black suit and black necktie, presented Dwight Yoakum, wearing an elevated denim look topped with a sharp navy overcoat, with the “Biggest Fit of the Night Award.” But men weren’t the only ones in suits. King Princess, fresh from performing at a Louboutin event at the Paramour Estate earlier that evening, came in a purple rhinestone-studded Versace suit, complete with Agent Provocateur bra, Sonia Boyajian brooch, and Louboutin loafers and red belt bag.

“We were going for a little Elton John/lesbian/Liberace/chanteuse vibe,” said her stylist, Sean Knight. Kathrine Narducci stood out in a red and black tartan plaid suit. Phoebe Bridgers wore a classic black tux and bow tie. And Julia Fox sported a lace jumpsuit.

The highlight of the night happened with a surprise performance by Post Malone in a three-piece navy suit from Tom Ford and a cream cowboy hat. Fresh off of the first leg of his tour, he closed the night in the Edition’s Sunset nightclub. The underground club, which is a throwback to the neighborhood’s dive clubs of the ‘60s and ‘70s, was the perfect venue to host the exclusive after-party, where guests danced to a private show from Malone and special guests like Swae. 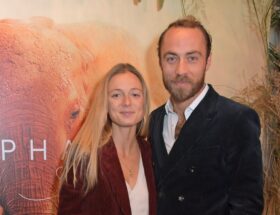 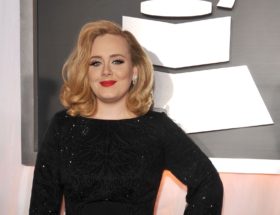 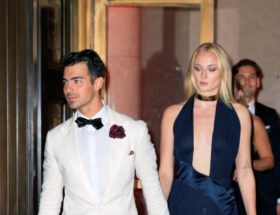