Prince George and Princess Charlotte cheered them on.

Kate Middleton and Prince William are a solid royal unit. Although the Duke and Duchess of Cambridge may have their individual pursuits and ventures, they’re still a dynamic duo that attends working engagements, supports charities, and participate in family occasions together. Today, however, the they’re going head to head.

The duke and duchess are competing against each other in the inaugural King’s Cup Regatta on the Isle of Wight. Granted, the event will raise awareness on their patronages, so they’re still working together for a good cause. Much to our surprise, William and Kate weren’t the only royals present. Two of their kids, Prince George and Princess Charlotte, were spotted on a nearby boat, watching the race.

Scroll through for more images from the charity race and family event.

The Duchess of Cambridge is all smiles for the race. Her boat represents The Royal Foundation, in connection with her work with young children.

Other team leaders include John Bishop for Action on Addiction, Katie Thistleton for Place2Be, and Helen Glover for the Anna Freud Centre, according to The King’s Cup official website.

According to the royal family’s official site, the winning team will be awarded The King’s Cup, a historic trophy first presented by King George V at Cowes’s Royal Yacht Squadron in 1920.

Kate ditched her princess-like wardrobe for sporty attire, including a baseball cap, jacket, and shorts.

Prince William, still looking stern, wears a black jacket and shorts with a blue cap for the tournament.

The boat for Tusk, which supports wildlife conservation, wins the first race. TV personality Bear Grylls was team leader for the boat.

Kate’s team comes in last overall, while Prince William’s came in third, royal correspondent Victoria Murphy reports. Regardless of the results, the duchess looks like a natural as a skipper.

The royal six-year-old is seen with Kate’s father, Michael Middleton, on another boat.

The third in line for the throne really took his boat ride seriously.

The young royal shares a sweet moment with granddad.

Can he participate in the next race please? 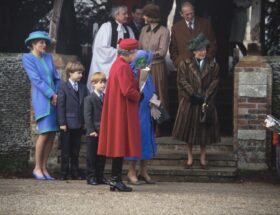 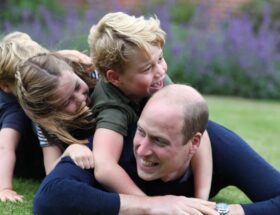 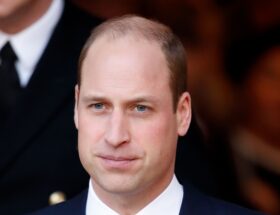