In 1984 everything was synthetic, from bottle blondes to spandex workoutwear to whatever was in Tab. Fashion, too, was in the middle of a synthetic revolution, following the widespread adoption of polyester in the 1970s. It was amid this material experimentation that Miuccia Prada introduced the Prada nylon backpack in 1984. Made from heavyweight, industrial nylon, the knapsack redefined what a luxury item could be. “Suddenly nylon started to look more intriguing to me than couture fabrics,” Mrs. Prada has said of the idea’s genesis. “I decided to introduce it to the catwalk, and it challenged, even changed, the traditional and conservative idea of luxury. I am still obsessed with it.”

The world is still obsessed with it too. Since reintroducing its Linea Rossa line of primarily nylon items in 2018 and incorporating the material into its runway collections, Prada has turned its ready-to-wear, accessories, and—of course—backpacks into a cultural phenomenon. But all this synthetic polymer fabric comes with a significant environmental impact. Enter Prada’s Re-Nylon initiative, one of the first projects to be implemented by Prada’s newish head of marketing and communication, Lorenzo Bertelli, since he joined the company last year. (Bertelli, a former rally car driver, is the son of Mrs. Prada and her husband, Prada Group CEO Patrizio Bertelli.)

“The idea [for using recycled nylon] came a long time ago, when the sustainability topic was not so common,” Bertelli tells Vogue over email. “Nylon is one of the fundamentals that established Prada’s modern fashion identity, but it also encapsulates the brand’s ideological approach: a respect of heritage while looking forward through a constant search for the new. Being provocative and open to endless reinterpretation, nylon was the perfect Prada principle to start with.”

Launched earlier this summer, Prada’s debut collection of recycled nylon pieces is composed of the same shapes Prada-philes have come to know and love, only now they are made from Econyl. Developed by the Italian textile mill Aquafil, Econyl is a proprietary material made from upcycling industrial nylon waste like fishing nets and carpets. The manufacturer estimates that every 10,000 tons of Econyl created saves 70,000 barrels of petroleum. What’s more, the material is endlessly recyclable, meaning, perhaps, that your Prada bum bag could one day be reborn as a Prada bucket hat. That idea might be a little ways down the line at Prada HQ, but it’s not totally out of the realm of possibility. “We are evaluating how to best recycle both our virgin nylon and Re-Nylon fabric scraps, as well as our store carpets,” says Bertelli. “We will announce our next steps as soon as they are certain and effective.” Bertelli and Prada also promise that all of Prada’s trendy nylon will be converted into Ecoynl by 2021, with the executive saying that there were “no big hurdles” in establishing the program.

In addition to rethinking its most popular products, Prada is donating part of the Re-Nylon proceeds to UNESCO to develop international educational programs about sustainability, and it has partnered with National Geographic on a video series that dives deep into the realities about contemporary recycling. Its first episode took actress Bonnie Wright to a recycling plant in Arizona. Its second follows model Adut Akech to a facility in Cameroon that collects fishing nets to be made into Econyl. Now you can like the earth and love your Prada backpack—guilt-free. 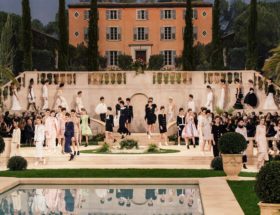 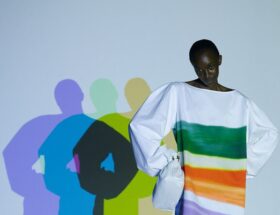