Elsa Schiaparelli and Salvador Dalí may have invented the art-fashion collaboration, but Louis Vuitton has really perfected it. Since Marc Jacobs debuted a collaboration with Stephen Sprouse in 2000, the first time anyone—ever—was given the blessing to alter or interpret Vuitton’s monogram, the maison has led the way in art-fashion mashups. In the near-20 years since that Sprouse collab, the house has enlisted everyone from Richard Prince to Takashi Murakami to Yayoi Kusama to put a spin on its bags, trunks, and ready-to-wear, creating an LV-branded encyclopedia of the contemporary art world. The brand has become so synonymous with fine art, in fact, it secured the rights to reproduce works from the Louvre as interpreted by Jeff Koons in 2017; a collaboration that made a Mona Lisa Speedy bag a must have item.

Today, Louis Vuitton is showing off a bit of its history in Beverly Hills with a new exhibition titled Louis Vuitton X. Encompassing two floors of an airy building on Rodeo Drive, the sensory exhibit includes many of the brand’s artist collaborations as well as ready-to-wear pieces from Marc Jacobs, Kim Jones, Nicolas Ghesquière, and Virgil Abloh. Yes, it’s beautiful, historical, and extremely cool—but it’s also staged to be the Instagram spot of L.A. for the length of its opening. (A big “Sorry!” to the pink wall outside Paul Smith’s store.)

Timed to the exhibition, LV will unveil six new artist collaborations with Sam Falls, Urs Fischer, Nicholas Hlobo, Alex Israel, Tschabalala Self, and Jonas Wood. Each of those contemporary artists interpreted the brand’s Capucines bag, named after the location of its first store in Paris. The classically-shaped tote was embroidered by Falls, woven and morphed by Hlobo, collaged by Self, and embroidered and dyed by Wood. Israel, a Los Angeles native, brought his signature wave pattern to the piece, going as far as to outfit it with removable surfboard fins that double as a comb and a mirror. “I felt that my Wave needed a surfboard element to complete the total feeling of the world I wanted the bag to evoke, so we went ahead and added a pair of fins to the bag’s silhouette,” he said in a release. “We’re a beach culture here in Southern California, and waves dictate the rhythm and pace of LA life.”

If that seems wildly fun, just wait until you see Urs Fischer’s bag, which transforms his fruit sculptures and paintings into dangling charms. “I’m not somebody who is usually comfortable taking on commissioned work, but occasionally I stumble across something that I am happy to do and this was the case with the Capucines bag,” Fischer said, explaining he intentionally chose to represent organic forms over man-made objects. “The things I chose are, in themselves, perfect shapes, so there was nothing else to add. An egg is already amazing; if it were spherical it would be boring. Fruits are often made to be very attractive in the same way that flowers are; that is how plants communicate and, in a way, it’s also how they have sex.”

So, a sexy bag that doubles as an art project that comes at the end of a smart and social-media friendly exhibit that will make all your friends jealous? Do we need to say more? We’ll we just add this: Rumor has it all of LV’s famous friends are coming to celebrate the exhibit and collaborations some time this week—you won’t want to miss it. 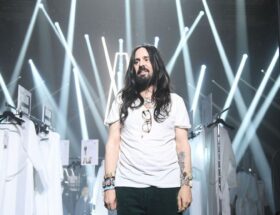 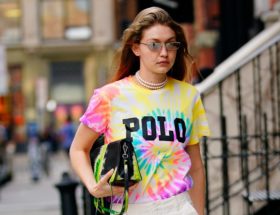