“Chanel stays true to their world,” Giveon says. “And I feel like I can identify a lot with that.”

Festival style is one of fashion’s most tired cliches: disposable crop-tops and fluttery skirts scrimped and twisted from the florid hippie legacy immortalized at Woodstock, optimized for social media’s brief glare. Its promised land is the annual two-weekend music festival Coachella, where performers often rise to the occasion as well, hoping to hold the attention of the huge crowds with intense tones, enormous silhouettes, and sometimes a multitude of costume changes.

So when Giveon, the 27-year-old singer known for his aching, classicist R&B, came onstage Saturday wearing a silky smooth ensemble in muted tones by Chanel, the subtlety of the ensemble felt almost shocking. Performing on Saturday, he wore a milky-blue silk shirt deftly scattered with little interlocking C’s (a piece from the Fall 2021 ready-to-wear collection), and a pair of slightly baggy pants in the house’s storied boucle. On his feet were chunky black work boots; on his finger was an 18k white gold and diamond ring from the house’s Fine Jewelry line. As if that weren’t suave enough, he occasionally took sips from a glass of white wine. It was intriguingly quiet, and a show of confidence in an industry that has cannily shaped fashion into a vector for Instagram-bait. It was anti-Coachella, or at least cavalier about its noisy diktats.

“I’ve learned that when someone’s watching a performer, what impresses people the most is how comfortable they are,” Giveon said in a phone call last week. “When someone can see that you can stand in front of a hundred thousand people, and look like you’re just in front of your friends, I think that feels like a superpower to be able to be that composed and focused.” Giveon’s lyrics almost always find their basis in his own life experiences, he said, and so ”you kind of want to look into everyone’s eyes, so they can understand the words that you’re saying.” The goal was to bring “that kind of intimacy to Coachella.”⁠ He’ll wear another look by the brand at his performance this coming weekend.

Giveon has frequently worn Chanel over the past year; earlier this month, he attended the Grammys in a sparkly tweed Chanel suit, and performed with Justin Bieber and Daniel Caesar in an embroidered cardigan. To his eye, Chanel embodies timelessness; its boucle cardigan jacket, strings of pearls, and quilted flap handbag function like archetypes. “They don’t really follow trends,” the musician, who works with stylist Yashua Simmons, explained. “Even other fashion houses—different silhouettes go in and out. Chanel stays true to their world. And I feel like I can identify a lot with that.”

While much of the festival has seen musicians doing fashion business as usual, in hot pink and volumetric shapes, Giveon sees the performance differently. “Everyone’s there to have fun,” he said, so the ideal wardrobe is “about balancing out, having fun, and being cool and flowy without trying to do too much. It’s not like the Grammys—you don’t have to pop out with a custom two-piece tweed.”

Even if he collaborates with some of the biggest hit-makers of today, like Bieber and Drake, he strives for something as enduring as a Chanel jacket in his music. “I don’t do any gimmicks when it comes to anything,” he said. “It’s just purely music, art, and voice.” Growing up, Giveon was a close observer of performers like Frank Sinatra, who championed a sense of simplicity around his commanding voice, even with the power of the Count Basie Orchestra behind him. It’s “a certain dreaminess, a charisma,” Giveon said.

The most unusual element of Giveon’s partnership is that Chanel doesn’t really dress celebrities in menswear—in fact, its men’s offering is limited, and rarely appears on the runways. It is mostly available in select stores by discrete inquiry, even as most other luxury brands push boldly into the burgeoning menswear space. Over the past few years, its inaccessibility has made it particularly coveted in the world of hip hop, with artists like Gunna, Young Thug, and Future wearing women’s shirts or boucle jackets in an oversized cut, draping the belts or jewels around their necks, or even carrying the famous quilted handbags across the body a la Supreme fanny pack. The house has had a longtime partnership with Pharrell Williams, who was a close friend of the late Karl Lagerfeld, and even released a capsule with the brand shortly after Lagerfeld’s passing in 2019. But even that collection was technically womenswear. Giveon is aware this partnership is pretty unusual, and that this adds to its appeal: “It’s easy to say, ‘This is cool. I did this with Chanel.’ But they literally don’t do this.”

Giveon’s partnership began back in June of 2021, when he wore a low-key selection of their necklaces along with a black tweed suit whose cuffs and neckline were laced with white ribbon for the BET Awards. Jewelry, he said, “softens me,” especially pearls, which are of course a Chanel signature, and a part of Coco’s immortal look. “Not too many people embrace the pearls,” he mused. “Pearls touch back into that timelessness of Chanel, and that timelessness I hope to have in my music twenty years from now.”

Musicians have become fashion’s power players over the past decade by embracing the avant-garde (or at least out-there) in style. Trends often start, or are amplified to a public not glued to livestreamed runway shows, on concert stages, album covers, and Instagram posts. In part, this is because musicians are often bigger risk-takers than other kinds of celebrities–think of how Gunna and Young Thug kickstarted the classic Chanel bags and Hermes Birkins as menswear must-haves—but also there is a prized synergy in the relationship between the artistic output and their image. A good outfit can enhance the depth of the music’s message, though often the emphasis is on the novelty, or unavailability, of the look or products, rather than the sophistication of the image and music as a whole.

So perhaps the serenity of Giveon’s look suggests a turning point. Or, at the very least, an alternative way of dressing for your art. “We’re in the space of instant gratification,” he reflected. “Sometimes I get that way myself, not necessarily with art—but if I text someone and they don’t respond within five, 10 minutes, I’m like, What’s going on? So I think it’s the same with music, or art—we get it, and we indulge in it and then, alright, what’s the next thing? But I think I was fortunate enough to grow up around the type of music my mom was playing.”

His mother’s name, he added, is Pearl. 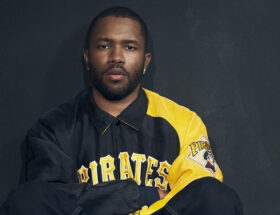