The rapper and first-time host wore eight different designer ensembles throughout the show.

The rapper and first-time host showed off her signature style at the awards show, where she wore a total of eight couture looks from start to finish. With the help of her stylist, Kollin Carter, who was also behind her vintage Mugler look at the 2019 Grammys, Cardi’s outfits were exaggerated and theatrical, stealing the show every time she popped up to announce a new presenter or performing act.

Cardi started her couture parade on the preshow red carpet, where she posed in custom Schiaparelli haute couture designed by the brand’s creative director, Daniel Roseberry. She paired the black strapless column dress with serious accessories, including a black tulle veil, long black gloves with golden nails, and gold chandelier earrings designed as crystal-encrusted eyes with fingers hanging down.

The “Money” rapper started off the show in a full showgirl look, wearing a giant Mohawk-inspired headdress from Alexandre Vauthier’s fall 2021 couture collection. She paired the accessory, which rose above her head and trailed to the floor behind her, with a black long-sleeved velvet gown, a statement silver and crystal necklace, and matching bracelets.

To accept her award for Favorite Hip-Hop Song for “Up,” Cardi wore a chartreuse Jean Paul Gaultier gown, a custom creation inspired by a look from the house’s fall 2019 haute couture collection. She wore the high-neck gown with minimal jewelry, letting the bright color and her hip-length straight hair stand out.

The “Bodak Yellow” rapper also chose Schiaparelli for her most casual look of the night (though, is it still casual when it’s couture?). She paired a denim jacket covered in the house’s signature gold-and-silver breastplate details with a pair of black leather pants.

The hilarious host ended the show in a white gown with a thigh-high slit, paired with a crystal-embellished hood by London designer Miss Sohee. The structural hood was covered with crystals, which adorned the trim and the sides in a starburst pattern. 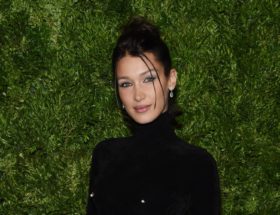 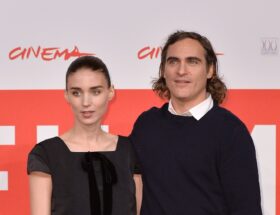 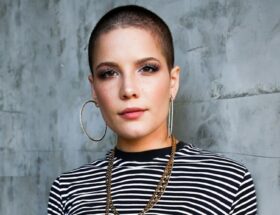