Really, nobody knew what to expect from the first digital fashion week—other than that everything was going to be radically different from what we’re used to. London was first to dive into the uncertainty: into the minds of designers, students, and brands working during the pandemic, into questions about re-setting the industry from environmental perspectives, and both of those issues suddenly overlaid with the urgency of the anti-racism uprising which has spread as quickly through the UK as it has in America.

How it came out, in its free-range open-access variety, was more like a cross between an experimental arts festival and an online convention of opinion. The conclusion I take to heart is that it platformed the very thing that I love best about fashion, the thing which the catwalk system blocks: hearing people talk directly and intimately about the meaning of their work, and being able to follow them into their worlds.

Recapping, I’d point towards London’s designers of color, to Bianca Saunders, discussing her sensitive approach to masculinity with Bruce Pask of Bergdorf Goodman and Neiman Marcus, and to Nicholas Daley’s film of his psychedelic jazz performance of a show, The Abstract Truth, which he showed in January. Priya Ahluwalia launched her book, Jalebi, with a virtual reality exhibition about Britain’s first Punjabi community in Southall in West London, inspired by her grandmother’s memories and dedicated “to representing the beauty of diversity and how immigration enriches lives.” The Indian designer Kaushik Velendra produced a video of himself hand-steaming the glamorously original molded body-pieces for men which he began developing at Central Saint Martins MA. And Osman Yousefzada aired the devastating film “Her Dreams are Bigger” in which he recorded the words of Bangladeshi women garment workers as they imagined the characters of the white women who buy the clothes they make.

Meanwhile, just as nobody really expected anyone to be able to make clothes during lockdown, some surprised by doing just that—but in ways that also militate towards change. Charles Jeffrey had a small Loverboy collection to show, and gave over his club night mini-event to black performers and graduate students Catherine Hudson and Halina Edwards in aid of UK Black Live Matters. Daniel Fletcher managed to get a collection ready to sell on his ecommerce site, using fabric he already had in his studio, with 10% of sales going to Black Lives Matter.

Ultimately, social and environmental responsibility are surfacing as far more important issues than how clothes can translate into digital presentations. Consider the Marques’ Almeida designers, who spent their months in lockdown in Portugal rebooting the way they do things, and launching the upcycled collection ReM’Ade with a commitment to transparency and fair pay. Indeed, whatever blends of physical and digital components may emerge, the imperative that internal structures need to change, and that action needs to be taken to care for people and slow down business operations—the implications of all these will be hard even for the industry’s giants to ignore.

But there’s hope. If you navigate around LFW’s Class of 2020 section, it’s clear to see how seamlessly qualified the youngest generation are to take on everything from sustainability to identity affirmation through to visual communication. From their bedrooms, garages, and gardens, they showed themselves ready-skilled with the abilities to express dreams, humanity, fear, and fun on next-to-no resources.

What sticks in my mind is a webinar discussion posted by the University of the West of England about the shape of the industry they originally thought they were entering in which student Shadia Houssein remarked, “the rules? They’re not going to be the rules any more!” Well, there’s the truth. 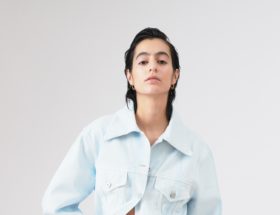 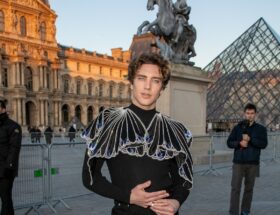