Yesterday, Gucci’s Alessandro Michele debuted his Fall 2020 menswear collection during Milan Fashion Week. The show marked five years since the designer showed his first men’s offering for the Italian label. The latest assortment aimed to challenge characteristics of masculinity in fashion—and this spirit was certainly seen in the buzzy front row. Jared Leto, in particular, ditched a stuffy suit in favor of a pretty, tailored look that had gender-fluid detailing, such as striking heels.

The actor’s fashion week look included all of his usual style signatures: flamboyance, bold colors—even a dramatic chapeau. Before the models hit the runway, Leto struck a pose on the catwalk sidelines, showing off his double-breasted blazer that had a pearl “GG” brooch on it. (In case you missed it, men in dainty jewelry is a thing.) He paired the smart jacket with a loud floral blouse and purple bellbottoms, the tricky pant being a favorite of fellow risk-taker Harry Styles as well. On his feet, meanwhile, was an eye-catching pair of gold-heeled disco boots that added infinite panache to his ensemble, as did his black wide-brimmed hat. Leave it to Leto to end Milan’s cluster of shows with a bang—he’s the best-dressed star from the city thus far. 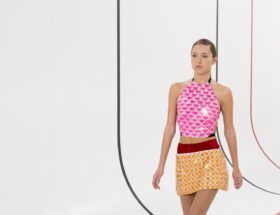