She crashed the set while her fiancé was broadcasting a Yankees–Red Sox game.

Jennifer Lopez definitely knows how to celebrate a birthday (and her 50th birthday bash last week is a huge testament to that). As her fiancé—former Yankees baseball player and current ESPN broadcaster Alex Rodriguez—turned 44 on Saturday, Lopez pulled out all the stops.

Yesterday, the singer crashed the set of ESPN’s Sunday Night Baseball, where Rodriguez was broadcasting a Yankees–Red Sox game. She brought a birthday cake, and Rodriguez’s daughters also tagged along for the surprise.

Check out A-Rod’s shocked face as he sees J.Lo appear behind him!

This isn’t the first time that the Hustlers actress honored her fiancé’s 44th birthday. On Saturday, during Lopez’s concert in Miami, she paused her show to bring Rodriguez onstage. In front of the entire arena, she gave him a baseball-themed birthday cake (complete with a baseball bat, ball, and an imitation of his Yankees jersey). She posted the sweet moment on her Instagram as well.

“Celebrating you today and everyday my love,” she wrote in the caption. “You are one of a kind, my hurricane and my calm in the middle of the storm … thank you for being such a beautiful light in my life … wishing you the most beautiful birthday ever!!! HAPPY BIRTHDAY 13!!!”

Last week, A-Rod surprised J.Lo for her 50th birthday. He gifted the singer a $140,000 Porsche convertible, which, according to an E! News insider, “came with a big gold bow on it” and a “license plate [that] says JLO.” 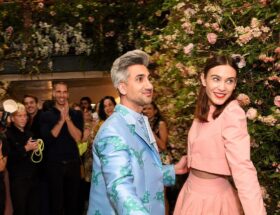 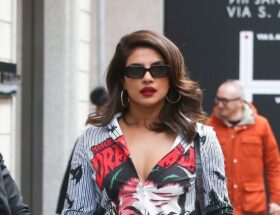 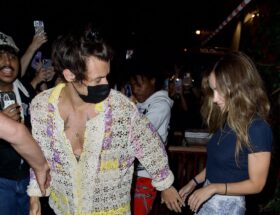