Janty Yates speaks to about working with Lady Gaga and reimagining the style legacy of Patrizia Reggiani.

Ridley Scott’s House of Gucci has officially landed in theaters everywhere. An adaptation of the 2001 book The House of Gucci: A Sensational Story of Murder, Madness, Glamour, and Greed by Sara Gay Forden, the film is filled with things we’re very excited about: Lady Gaga as a Machiavellian Patrizia Reggiani; Adam Driver as her husband, Maurizio Gucci; Salma Hayek as a tarot card reader; Jared Leto in truly grotesque prosthetics; Al Pacino (enough said); and, of course, tons of ’70s, ’80s and ’90s capital-F Fashion.

We caught up with iconic costume designer Janty Yates(Gladiator, All the Money in the World, The Martian, American Gangster) over the phone last week to learn more about the film’s costume design, what it was like to work with Lady Gaga, and how fashion today is worlds away from the fashion we see in House of Gucci.

Janty, your body of work is enormous. You’ve done a lot of period and sci-fi pieces, from Gladiator to Prometheus. Obviously, House of Gucci draws on a really seminal period in fashion history, the ’70s and ’80s, so how was working on this one different?

Well, it was different because both Ridley and I lived through the ’70s and ’80s!

What was your research process like for this film?

I went to the Gucci Museum in Florence, and it was the best thing ever. They have costumes back to the ’70s in there. They have pictures of men making shoes and bags in the ’40s and ’50s, all the portraits of the family, so I took four million photos and collated them into these enormous files. There were also characters in the script we needed to research specifically, like Marlon Brando. I compiled all of this research and sent it to Ridley—and it was the first time I ever got an email back from the president of MGM saying, “Well done.”

What was the collaboration like with today’s actual “House of Gucci”?

They allowed us in the archive, and we pulled about 15 or 20 outfits. We used all their archive bags, sunglasses, and belts.

Did you end up using Gucci archive pieces in the film?

We hardly touched them. They were in a strong room at our hotel under lock and key and guard the whole time. We only ended up using two in the film—when we see Lady Gaga in a Double G tunic and trousers with leather trim on 42nd Street finding cheap fakes, and when she’s in a Double G silk blouse and leather skirt when she receives her divorce papers.

For Patrizia’s costumes, did you try to create replicas of what we know she actually wore, or did you change the costumes to emphasize parts of the character?

It’s a hodgepodge of things. I was able to raid several of the archives in Italy and build up a few rails of vintage YSL and Dior. Patrizia didn’t dress in much Gucci at all. We took two or three looks from Patrizia’s real archive. There’s a pink evening dress we translated into red satin for the first meeting with Maurizio. We also changed her wedding dress. We had narrowed it down to two and decided which one she would wear on the day. We had the traditional wedding dress from the photos, but the one we selected was much cuter. The one we selected was glorious and showed her calves, and was covered in gorgeous lace all sewn by hand. The dress Patrizia actually wore was very simple, Gucci, but with a high neck and sleeves, and just wasn’t very exciting. It was very “convent.”

So Patrizia Reggiani was never a big Gucci wearer, even when she married into the Gucci family? Why do you think that was?

I think Gucci is a wonderful company—brilliant belts, brilliant footwear and bags—but their fashion at the time was conservative. When Tom Ford came around, he cut through it like a hot knife through butter, and that’s when it became so sexy, it was ridiculous. I don’t think ready-to-wear was Gucci’s forte at the time. And Patrizia was a very sexy lady. She dressed to impress, hence all the jewelry. She wanted to show her boobs off, her tiny waist, and voluptuous figure. … I’ve always described Gucci of that era as “round and brown.” Patrizia wore lots of YSL and Dior.

I’m thinking about today, if we saw the spouse of a major designer wearing a competitor brand, I’m not sure that would fly.

Well, there weren’t even phones in those days! There certainly was no social media. It was very much what the newspapers would run, and they didn’t really care so long as she looked voluptuous and lovely. It wasn’t really until the later ’80s when you saw Armani and Versace set off and become these powerhouses, and then Tom Ford turned the other way in the ’90s and created another huge fashion house. That’s when these “mega houses” started growing.

Lady Gaga was incredible in A Star Is Born, but this film feels like the role she was born to play, because in addition to her music, we really know and love Gaga for her fashion. How was working with her different from working with other actresses?

Normally, with actress you just make sure the thing fits and you do the jewelry on the day of. With LG, it was more time-consuming. It was great, don’t get me wrong. She was completely in character every fitting, and every fitting would be three or four hours. We would only get three outfits sorted, but she would do it down to the earrings, bag, gloves, the hat, to the nth detail. We would act out the scenes in the fittings; I’d be Paola and she would be Patrizia, and between lines, she would say, “No, we need the shorter wig, the longer wig, heavier eyeliner,” or whatever.

I imagine her background in showbiz also helped.

LG has an enormous body of work. She’s used to a million snafus each night in Las Vegas or wherever, and she’s used to making dresses in a day. She’s wonderful like that. 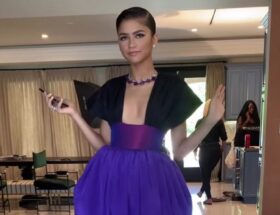 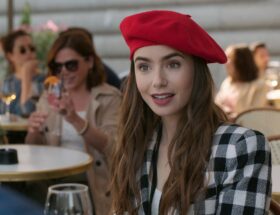