When was the last time you touched something—or someone—without being cautious? With social distancing top of mind, one of the most basic human inclinations has been stripped of its pleasure, but Harry Styles wants you to remember that sense of physical joy. His latest video, “Watermelon Sugar,” which premieres today, is dedicated to the concept of touch, i.e., kissing, hugging, dancing, and all those things 2020 has been short on.

The accompanying visuals from directing team, Bradley & Pablo, capture all that’s electric about Styles’s lyrics. Filmed beachside with an array of sun-kissed models and actors filling out the background, the video depicts a carefree SoCal love-in. As Styles sings, “I want more berries and that summer feelin’ / It’s so wonderful and warm,” while indulging in a fresh slice of fruit, you can almost feel temperatures rise.

Naturally, the unbothered aura of the video comes complete with a fashion statement. Other stars hit the beach in T-shirts and cutoffs, but Styles isn’t one for basic. His retro-minded look has become as recognizable as his music, and for “Watermelon Sugar,” his longtime stylist, Harry Lambert, pulled a selection of upbeat menswear that connected with the song’s sentiment. As always, Alessandro Michele’s vision was present—that cropped rainbow jumper and floral scarf combination is fresh from Gucci’s fall 2020 collection—but there was more at play onscreen. Hippie culture and its blithe sensuality provided a starting point for the clothes worn by the cast: knit bikinis, crop tops covered in Pop art florals, and rainbow short shorts.

You can’t look to history without pulling out some vintage, and Lambert dug into the National Theatre archive to find a few choice pieces. That crochet vest Styles wears at the video’s start is authentically old-school, as are the pairs of Elton John-esque red heart and blue flower sunglasses. Heightened by the inclusion of Emily Adams Bode’s floral blouse during the finale scene, the blend of past and present made for great visuals. Bode’s habit of remixing antique textiles into fresh silhouettes is an ideal complement to Styles’s aesthetic. Even his jewelry—pearls, initial rings, and peace beads—seemed ripped from another era.

As the world preps for its first socially distant summertime, there is a nostalgia for touch. For most people, frolicking on the beach, eating watermelon, and bumping bodies isn’t in the cards these next few months, but the sight is still appealing. As an artist who appreciates tactility—last year’s unapologetically sexy “Lights Up” clip tackled similar subject matter—he’s the right person to remind fans about the joys of human connection. His vision for a 2020 summer of love may feel far from reality, but it presents a dreamy and chic escape. 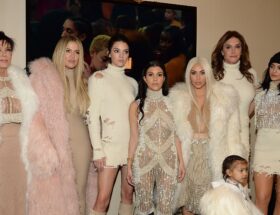