Pillars of white light strafed the night sky from a vast black stadium erected opposite the Eiffel Tower. Somehow, the Saint Laurent show sensation has morphed into something between an open-air city spectacle, a rock concert and a brand power rally. In the ‘experiential’ stakes, public visibility of Saint Laurent under Anthony Vaccarello’s creative directorship reaches for miles and miles across the center of Paris; it’s an event which gathers hundreds of onlookers who sit on the walls opposite to see models passing by. As a phenomenon, it could fuel any number of case studies about how the exclusionary hierarchies of luxury fashion have fallen and dissolved into irrelevance in today’s digital world.

Yet for all that, everything which took place on that runway tonight centered around what Yves Saint Laurent did in the 20th century—his Le Smoking suits, and his hippie deluxe Russian collection—and how Vaccarello systematically retools, re-channels and reiterates it for a new generation. Amid the automated cross-beams of lights swiveling from the floor, he began with reams of micro-shorts and bermuda cutoff jeans, riffs on tailored jackets, Betty Catroux sunglasses and slick, funnel-leg Western boots.

After nailing that message (a believable one, since all girls have been addicted to tiny shorts this summer), the segue to hippy-glam—the style which Saint Laurent himself elevated from the street in 1976—began with turban-tied Lurex headscarves and then into an extended riff on gorgeous gold paisley embroidered dresses, tissue-like chiffon blouses, pleated lamé skirts, peasant smocks and off-the-shoulder gathered necklines.

For a designer who has often kept to a strict and narrow canon of black, this was a softer, more delicate side to Vacarello’s sensibility and one rich with a kind of relatable, easy, romanticism which young women haven’t been offered recently.

But then, there was even more. After a dramatic pause, lights down, came the Saint Laurent pay-off: all the tuxedo suits, led by Stella Tennant and closed out by Naomi Campbell. Message? This is timeless Saint Laurent, not just for the leggy and skinny in their clubbing years, but for all generations. 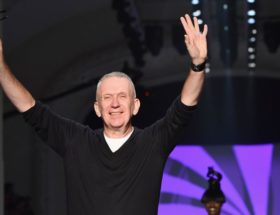