Entirely by accident, the London Fashion Week press view for this season’s showcase of Hong Kong design talent started where all the action is in Hong Kong right now—in the street. Four sets of models in collections by Yeung Chin, Loom Loop, 112 mountain yam, and From Another Planets were thronging the road outside along with all of the attendees, passers-by and impatient black cab drivers because one of the designers, Chin, had set off a fire alarm in the venue moments before it was due to open.

Once the London Fire Brigade had established all was well, and Chin decided to forgo a smoke machine for his presentation, we trooped inside to view some dreamily opaque deconstructions in pastel from Mountain Yam, and Kenax Leung of From Another Planets’s sophisticated take on hybridized outerwear. Impressive also were Polly Ho of Loom Loop’s heritage-driven but highly modern pieces in Canton silk (plus some awesome sneakers).

It was Chin, though, who made the most noise. In his tightly enclosed performance space the PA fired up a recording of “Do You Hear The People Sing?” the Les Misérables number that has become a standard amongst the hundreds of thousands of pro-democracy demonstrators who have filled the streets of Hong Kong this year. In asymmetrical skirts and shorts a pair of performance artists danced as the models circled them, marching slowly and awkwardly, wearing only one raised wooden clog each. They had on dresses that featured pretty panels of gore—embroidered hearts, lungs, and other body parts. Afterwards, Yeung Chin explained: “In Hong Kong now we have some politics. We just ask [the government] ‘Why you don’t hear our voice?’ So this song is ‘Do You Hear The People Sing?’ and the models just wear one shoe when they walk to be unbalanced. That is because Hong Kong right now is unbalanced.” He added: “I don’t want to put politics on my collection, in my clothes—but I have to say something.” 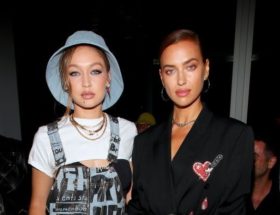 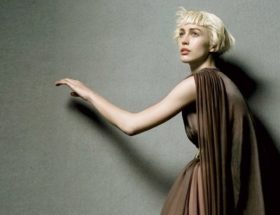 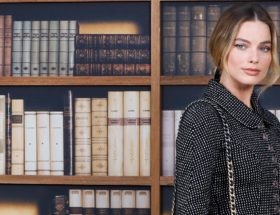