From the new Schiaparelli to Chanel, all the most swoon-worthy runway haute couture.

Despite an ongoing European heatwave, Fall 2019 Haute Couture is hitting the runways in Paris this week. From over-the-top, swoon-worthy gowns to the most beautiful (and unexpected) hand-sewn details, we’re tracking all the most breathtaking runway looks throughout the week. Click through to see all the best Fall 2019 Couture Week looks in real time.

Feathers, capes, and volume: Clare Waight Keller brought the drama to Givenchy’s latest couture collection. Fantasy and glamour came to life in the form of whimsical, towering feather gowns done in shades of mint green and black. A stunning lavender cape coat and tailored coat dresses complete with feather details brought elegance to new heights. And in a sea of ultra-glam ball gowns and feathers, sparkling metallic sequins and tailored coat dresses added unexpected touches of cool. Waight Keller has only been designing couture for two years now—but with this collection, it seems she’s already becoming a master of the art. —Lauren Alexis Fisher

Virginie Viard showed her first couture presentation today, and it was nothing short of a hit. All roads lead back to Coco — the sweeping library that housed the Chanel Couture show at the Grand Palais was inspired by a neutral-hued one at the house’s founder’s home on Rue Cambon. The collection paid homage to those Chanel roots favored by Coco and Karl Lagerfeld: tweedy, long slim jackets, skirt suits, little black bowed shoes, pearl accents. But it was also very much the designer’s own. Oversized, round shouldered jackets over mini dresses, ultra feminine dresses with bows and sheer chiffon, face framing ruffs, some elegant sparkle. Viand is keeping Chanel Chanel, bien sur, but with a new approach to quiet sophistication that feels all hers. — Kerry Pieri

From candy-colored pastels to smart suiting and grand red carpet-worthy gowns, the Armani Privé couture woman is ready for every occasion this season. There were series of ‘80s-inspired polka dots, there were sheer nipple-freeing looks, there were even technicolor gowns made of tulle and (faux) fur. Details like oversized bows and tiny leather rose hair pieces amped up the femininity of the collection—just in case all the pastel tulle and silk didn’t do so enough. But whether she’s going to the boardroom or a ball, Mr. Armani delivered plenty of dreamy looks to choose from. —Lauren Alexis Fisher

Floral motifs, grand volumes, and high-low hemlines are cemented in Giambattista Valli’s DNA, so much so that the designer launched a range for H&M during the Cannes Film Festival via Kendall Jenner, showcasing his statement high-low, super-voluminous ballgown done in a fluorescent pink.

With a diffusion range on the horizon, this Haute Couture collection was the designer’s opportunity to showcase what he does best on the highest end; bring on the techniques that cannot be duplicated, diffused, or whittled down to fast fashion. Handmade florals were scattered throughout the collection, sometimes blooming from head-to-toe. Hand-draped gowns that in the past would have been inserted into a runway show as goddess-like palette cleansers amidst bold flowery ball gowns were gathered, cinched, and artfully swathed in new ways.

Per usual, the collection ended with Valli’s bold tulle confections, but this season the designer chose to forgo a runway presentation in favor of an exhibition. The gowns still wowed off-figure, but we’ll have to wait for Valli’s It-girls (like Jenner) or brides (like Charlotte Casiraghi) to really see them move on the red carpet or the aisle. —Carrie Goldberg

Tamara Ralph and Michael Russo showcased their latest Couture range at the most apropos location yet for them a Paris—the British embassy. The couple and design duo are Brits after all, and in the gardens, their latest ultra-femme silhouettes made their debut.

While the brand is best known for glamorous eveningwear, these looks were by far the brand’s most romantic and feminine yet, better suited to a wide age range and a more youthful clientele. Skirt hemlines were higher, shoes were more gamine, pearls replaced crystals, and feathers and frothy tulle subbed in for draped silk and all-encrusted beaded bodices. With a bride finishing off the show (per usual), these looks felt fitting for the gala circuit, awards season, film festivals, and (perhaps most glaringly) wedding season. The bridal finale and the suite of white looks at the top of the show had our fingers crossed; could more bridal (and not just hearsay from the days of Megan Markle’s royal wedding dress rumor mill) be on the horizon for the brand? Here’s hoping. —Carrie Goldberg

It was a new day at Schiaparelli where Daniel Roseberry, a 33-year-old designer from Texas, made his debut at the storied fashion house. As the looks hit the runway, the artistic director stationed himself at a desk in the background where he sketched in real time. It may have been his first time ever designing couture, but Roseberry proved he’s hardly a novice when it comes to the art of swoon-worthy gowns. Featuring 30 looks, the collection went big on volume with billowy sleeves and dramatic ruffles and big on color with striking oranges, reds, and pinks. There were ballgown skirts and bras, sparkling crystal tassels, and colorful silk headpieces. But it was the two finale gowns complete with dramatic cloud-like flair that proved Roseberry is one to watch in the couture world. —Lauren Alexis Fisher

Instead of asking “is it camp?” Maria Grazia Chiuri posed a different question at Dior’s Fall 2019 Couture show: “are clothes modern?” The Bernard Rudofsky quote from his 1944 exhibition set the tone for the collection, after being printed on the first all-white look. Following suit, a series of almost all black gowns and LBDs hit the runway–complete with feather and tulle details. It was dark and moody, but was it modern? Much like camp, the answer largely depends on your interpretation. —Lauren Alexis Fisher 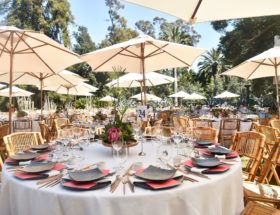