Real and naive were two words Miuccia Prada used to describe her Resort collection last night; she also said it was “a protest against too much.” That might lead you to think the clothes were quite minimal, but much of the magic was in the details: the smocking of the cotton blouses, the rounded proportions of the printed matching sets, the clashing stripes and florals in her sack dresses. There’s no better place to see all of those flourishes than Corey Tenold’s backstage photos, which reveal zoomed-in views of baroque pearl jewelry, bold eyeshadow, floral scarves, swirls of paisleys, cabbage roses, and geo prints—not to mention candid model moments (Adut! Gigi! Lexi!) before they walked the runway. These photos are just the tip of the Resort season iceberg: Over the next two months, we’ll cover nearly a dozen “destination shows” around the world, from New York to Berlin to Shanghai. Scroll through Tenold’s Prada coverage here, and check back in the coming weeks for more of his exclusive photos. 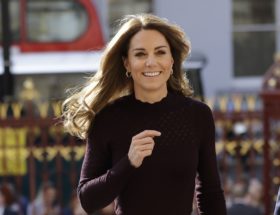