Gigi Hadid has been wearing a lot of tie-dye lately. The moment those swirly prints appeared on the Spring 2019 runways, Hadid, like a true trendsetting model, began wearing them immediately. Back in March, just days after Fashion Month came to an end, she hit the streets of Manhattan wearing a multicolored Polo Ralph Lauren T-shirt covered in the groovy pattern. Now, the model is leaning into the look just in time for Coachella.

For the festival kick-off event this weekend, Hadid wore a tie-dye vest, by Ganni, with a cropped white camisole underneath. The ’60s-inspired pattern—in orange, black, and pink—was an appropriately graphic piece for the event, where one goes to be seen. She styled it with floral-printed trousers and some hefty combat boots. But it was her jewelry that really took her outfit to the next level. She played up the playful aesthetic with an array of colorful accessories, including a large Jacquie Aiche pendant, tons of beaded and shell necklaces and bracelets, and a vintage Louis Vuitton pouch bag by Takashi Murakami, clipped to her vest just so. The ensemble was bright, bold, and definitely not for the faint of heart; a striking It girl-at-Coachella moment. 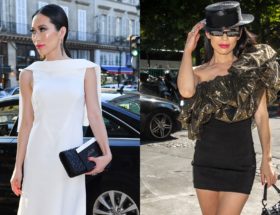 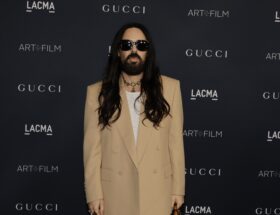