This Memorial Day, Lifetime is giving fans of Meghan Markle and Prince Harry a surprise treat. The network which gave us You, UnReal, and a bevy of dramatic made-for-television movies, announced on Monday that it is dropping a sequel to the 2018 film Harry and Meghan: A Royal Romance.

While the original and slightly fictionalized project chronicled Duchess Meghan and Prince Harry’s relationship timeline from their first blind date up to their epic wedding, the 2019 version will focus on the first year after their marriage.

According to a press release, the film will dive into the royal couple’s new family dynamics and how they are “blending their families and cultures. Harry and Meghan’s core values are put to the test as they try to find the balance between honoring royal tradition and staying true to their beliefs.”

The film’s screenwriter Scarlett Lacey and actress Tiffany Smith (Supernatural and Jane the Virgin), who portrays Markle, spoke with Vanity Fair about the movie’s premise and the creative process behind undertaking their respective roles.

Lacey confirmed to the magazine that the celebrity wedding guests–Oprah Winfrey, the Beckhams, and the Clooneys–will “definitely play a part in the movie!”

She also shared that although the tabloids have alluded to a severe rift between Markle and sister-in-law Kate Middleton, the film will explore the pair’s positive relationship.

“Women can support women and uplift each other. Tabloids and magazines can say whatever they are going to say, but I think seeing those women, and how we may have misinterpreted what maybe went on, it’s going to be exciting for fans,” Lacey said. “What I loved about the script is that it’s really positive and uplifting and paints [the royals] in a really, really beautiful light.”

Lacey added that the foundation of the movie is based on fact; however, “universal things any new couple experiences” will be added to the script. The film will also explore Markle’s pregnancy, “and what that means to any two people making a new life together.”

Lacey added that the foundation of the movie is based on fact; however, “universal things any new couple experiences” will be added to the script. The film will also explore Markle’s pregnancy, “and what that means to any two people making a new life together.”

The project’s screenwriter also teased that Maggie Sullivun, the actress set to play Queen Elizabeth II, will play charades with Markle, and a cute puppy will make a cameo. (Duchess Meghan and Prince Harry reportedly have a black Labrador with an undisclosed name).

“Perhaps what’s surprising is how much the movie gets into the real human emotions of the story—we weren’t just interested in the tabloid aspects. These characters are real people living in extraordinary circumstances at a crucial time in history,” Lacey said. She noted that she was “surprised” to discover there is an “authentic connection between Meghan and Prince Charles, not just as people, but as rebels who see eye to eye on so many things.”

Although no one in the public genuinely knows how Markle handled the onslaught of scrutiny on her high profile relationship and subsequent family drama, Smith “look[ed] at who she is as a woman. How I felt in those moments, and, like I said, trust the director that we can bring some of that to life in the best way possible.” Smith continued that she referenced relevant royal content online and she watched the pair’s engagement interview “a lot.”

Smith often referenced a moment in the sit-down where Harry and Meghan seemed a bit more candid because they thought the cameras had stopped rolling. “That, for me, was a really crucial thing to go back to, because a lot of what we’re doing in the movie obviously is [happening] behind closed doors, and [is] us reimagining what could be going on when the cameras aren’t on them,” she told Vanity Fair.

Unfortunately, Markle’s two baby showers won’t make it to the film, but “there is an Easter-egg moment between Meghan and Kate that references cultural differences between Brits and Americans when it comes to baby showers,” Lacey said.

She added that the project was in production when news of Markle’s American baby shower at The Mark Hotel in New York City broke. “With so many exciting things happening every day in the royal family, if we tried to update it in real time, we’d have to do a live show,” she added. 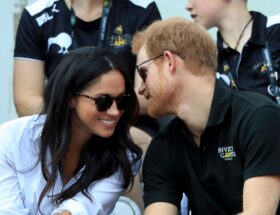 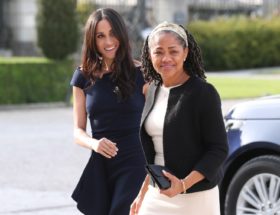