rince Harry had plenty of dad training today during his latest royal engagement at St. Vincent’s Catholic Primary School in Acton, London. The purpose of his visit was to plant a tree in support of the Queen’s Commonwealth Canopy, her worldwide conservation initiative, but he also got to bond with some kids (and an adorable dog) along the way.

While greeting some students during his trip today, Harry was seen miming a baby bump on his belly, likely telling the kids about his wife Meghan Markle’s pregnancy, according to a clip shared by journalist Valentine Low of The Times.

We can’t hear exactly what Harry was saying to the students in the video, but we’re sure he had a sweet anecdote about Meghan and their future first child, who’s reportedly due this spring.

The schoolchildren greeted the Duke of Sussex with sweet welcome messages on crafted banners. One even included a nod to the future baby Sussex, reading, “Good luck with the baby.”

In addition to chatting with young ones and getting his hands dirty with some garden work, Prince Harry also had a sweet moment with a dog at the school named Winnie.

The pet was noticeably excited for the royal’s arrival, but then again, who wouldn’t be? 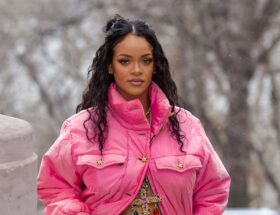 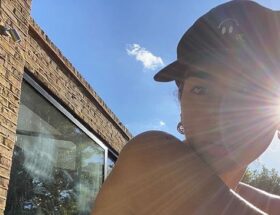 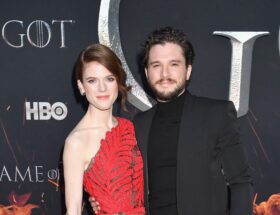